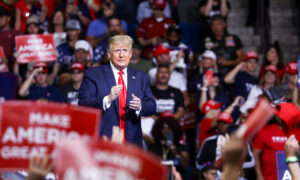 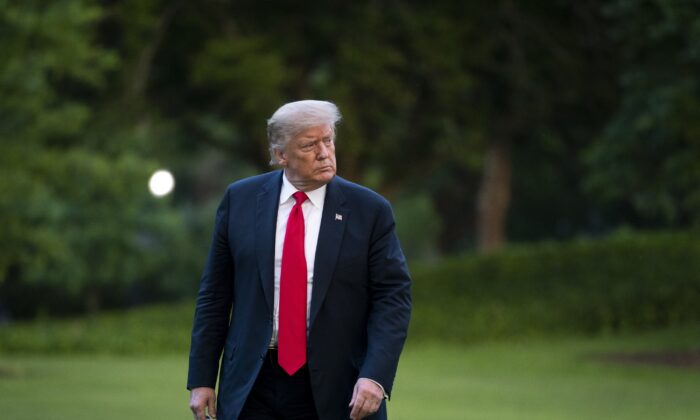 President Donald Trump walks to the White House residence after exiting Marine One on the South Lawn in Washington on June 25, 2020. (Drew Angerer/Getty Images)
Social Issues

Some Statues Can Come Down Through a Legal Process, Trump Says

President Donald Trump late Thursday said statues can come down but the removal process should be done legally, as opposed to the vandalism seen in Washington and other cities.

“We can take things down, too. I can understand certain things being taken down, but they ought to go through a process legally,” the Republican president said.

“And then we take it down; in some cases, put them in museums or wherever they may go.”

Government officials in a number of states, including the Carolinas, have removed statues of slaveowners with plans to place them in museums or educational institutions.

Activists have even discussed removing statues of Jesus, Trump said, referring to calls made by Shaun King, a former Bernie Sanders delegate, among others.

Describing those fomenting chaos as troublemakers, agitators, and anarchists, Trump said they have nothing to do with any particular event.

“The big thing they want is they want to really destabilize our country, and we don’t let them,” he said, several days after he said he was authorizing federal officers to arrest any person who vandalizes or destroys a monument or other federal property.

One group, in parallel with a legal effort from a delegate, wants to tear down the Emancipation Statue in Washington, which was paid for by freed slaves and honors Lincoln for ending slavery.

They planned to do so Thursday, but strong barriers were placed around the memorial. The group reportedly postponed their vandalism attempts until Friday night.

“You have somebody, I think, that wasn’t freed, and he’s getting up. It’s the position of he’s getting up; he’s being freed by Abraham Lincoln,” Trump said, describing how he sees the statue.

“And I can see controversy, but I can also see beauty in it. And it was paid for by slaves. I don’t know if you know that. It was paid for because they were so grateful to the president. It was paid for that reason. And they want to take it down,” he added, before making the statement about moving statues to museums.

An audience member inquired about what unfolded in Wisconsin late Wednesday, when two statues, including one showing an anti-slavery activist, were toppled, and hooligans assaulted a Democratic state senator.

“But it did happen, and it was a shame. And the person they beat up was a Democrat who happened to be gay. And he was probably out there rooting them on or something, because Democrats think it’s wonderful that they’re destroying our country. It’s a very sick thing going on. Nobody has ever seen it,” he claimed.

Evers activated the National Guard Thursday after the wave of violence.

Few Democrats have spoken out against mobs taking down statues. Rep. Tom Malinowski (D-N.J.) called for people to petition their local government if there are statues they don’t like.

“Your perceived righteousness is not license to smash whatever you don’t like,” he said in a social media statement on June 23.

Trump took credit for federal officers stopping vandals from ripping down Jackson’s statue that sits near the White House. National Guard troops deployed this week to guard monuments in the District of Columbia while the U.S. Marshals have reportedly been told to prepare to help protect national monuments throughout the country.

“We told them: Every night, we’re going to get tougher and tougher. And at some point, there’s going to be retribution because there has to be. These people are vandals, but they’re agitators, but they’re really terrorists, in a sense,” Trump said.