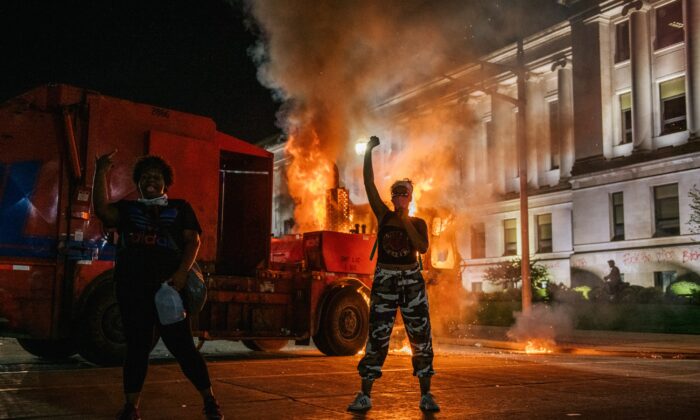 Hundreds of Black Lives Matter demonstrations involved violence, according to a new study.

Approximately 7 percent of demonstrations linked to the movement between May 24 and Aug. 22 in the United States involved violence, according to researchers with the U.S. Crisis Monitor, a joint project between the Armed Conflict Location & Event Data Project (ACLED) and the Bridging Divides Initiative at Princeton University. Overall, more than 10,600 demonstrations took place during the time period studied, researchers said.

“Peaceful protests are reported in over 2,400 distinct locations around the country. Violent demonstrations, meanwhile, have been limited to fewer than 220 locations,” they wrote.

Violent demonstrations are defined as “demonstration events in which the demonstrators themselves engage in violently disruptive and/or destructive acts targeting other individuals, property, businesses, other rioting groups, or armed actors.”

Riots have caused millions of dollars in damage in a number of large cities since May 25, when George Floyd died in police custody in Minnesota, including Portland, Oregon; Seattle; and Minneapolis.

Hundreds of people are facing charges for participating in the destruction.

The Black Lives Matter Global Network didn’t immediately respond to a request by The Epoch Times for comment.

Researchers accused the federal government of responding in a heavy-handed manner to demonstrations, promoting claims that the Trump administration inflamed the situation in Portland by surging federal officers and agents there in July to protect a U.S. courthouse that became a target of rioters.

“Although federal authorities were purportedly deployed to keep the peace, the move appears to have re-escalated tensions,” researchers wrote, publishing figures that said more use of force was reported after the surge than before it.

Portland officials had ordered police officers not to respond to violent demonstrations in the city in an attempt to deescalate the situation. When rioters targeted the courthouse, they didn’t respond, prompting the surge.

Data also shows more violent demonstrations taking place in Portland after the surge, researchers said. Officials expected that the heightened tensions would die down after federal officers pulled back in late July, but the opposite happened, and rioters began targeting different parts of the city, alternating between different police precincts, county buildings, and police union offices.

The Department of Homeland Security didn’t immediately respond to a request by The Epoch Times for comment. Acting Homeland Security Secretary Chad Wolf has defended the surge, telling members of Congress last month that federal law enforcement officers “were abandoned due to the dangerous policies by local officials.”

A number of non-state actors have intervened in demonstrations in recent months, including the far-left Antifa network, the anti-government Boogaloo Bois movement, and militias such as the New Mexico Civil Guard.

Since May, such actors have engaged in demonstrations over 100 times, according to the report. In July, nearly 30 such events took place, compared with zero from July 2019.

Out of over 360 counter-protests that took place during the studied time period, 43 turned violent, with clashes between pro-police demonstrators and demonstrators associated with the Black Lives Matter movement, according to the report.

In one of the latest instances, skirmishes unfolded between pro-President Donald Trump ralliers and counter-demonstrators in Portland on Aug. 29. That night, an Antifa member allegedly killed a supporter of the right-wing group Patriot Prayer.

ACLED, a nonprofit, receives funding from the State Department and a number of other governments and groups, including the German Federal Foreign Office and the University of Texas–Austin.