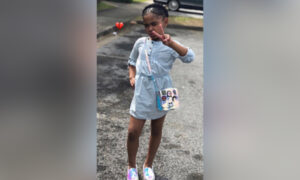 Father of 8-Year-Old Killed in Atlanta: 'They Say Black Lives Matter—You Killed Your Own'
0

Facing attacks for her stance, the senator said her efforts stem from the BLM’s goals, which include disrupting the nuclear family, defunding the police, and threats to burn down the American system.

“Sports have tremendous power to unite us. But the WNBA has embraced the Black Lives Matter political organization,” Loeffler said during an appearance on Fox News’ “The Ingraham Angle.”

“This is a very divisive organization based on Marxist principles,” the senator added.

Two of the three BLM co-founders are self-described Marxists, followers of theories that stem from Karl Marx’s teachings. Marx is known as the founder of communism.

Sen. Marsha Blackburn also took aim at the group this week, writing on social media: “The founders of the political arm of the Black Lives Matter organization are self-proclaimed ‘trained Marxists.’ We are witnessing a movement to wipe out our history, destroy our families and burn our country to the ground.”

The WNBA is planning to start its season late this month with a weekend of games centered around the Black Lives Matter movement.

Teams will wear special uniforms featuring the names of people killed in instances of confirmed or alleged police brutality, including Sandra Bland and Breonna Taylor, and players will warm-up shirts that say “Black Lives Matter.” The phrase will also be displayed on courts.

“We are incredibly proud of WNBA players who continue to lead with their inspiring voices and effective actions in the league’s dedicated fight against systemic racism and violence,” Cathy Engelbert, commissioner of the league, said in a statement.

Loeffler in her letter to the commissioner urged league officials to roll back the plan and instead place the American flag on every jersey.

“Our flag has weathered countless storms, wars, and civil unrest. It symbolizes the strengths unique to our country and the American people. It stands for freedom, equality, and hope. This important symbol will unite us as we work toward a better, brighter, and more equitable tomorrow,” she wrote.

A number of players around the league spoke out after Loeffler’s letter was made public. Many of them were critical of the senator. Some called for Loeffler to be removed as co-owner of the Dream.

“Our league is made up of 80 percent of black females,” WNBA player Natasha Cloud said during an appearance on “CNN Tonight” this week.

“To be a partial owner … but you don’t support them when they take their uniforms off—it’s a problem.”

On Thursday night, Loeffler said she would not step down from her position.

Loeffler said she’s against racism but charged that BLM isn’t about combating racism.

“They want to abolish the police completely within five years. and we can see what’s happening across the country with this threat of defunding the police,” she said. “You’ve seen anarchy and riots, you’ve seen murders in Atlanta. This organization didn’t come out and protest the murder of an 8-year-old girl in our streets as a result of this mob rule that was happening in this autonomous zone.”

Secoriea Turner, 8, was killed by a bullet near the Wendy’s where Rayshard Brooks was shot by police after resisting arrest. The car the girl was riding in was surrounded by an armed group who has been stopping locals and manning checkpoints, according to police and elected officials. That’s when someone opened fire.

Secoriea’s father said at a press conference: “They say black lives matter. You killed your own. You killed an 8-year-old child.”

Loeffler said she’s taking attacks over her anti-BLM push. She hopes that her speaking out will inspire others to do the same.

“This isn’t about me, this is about every American’s right to speak out, to enjoy free speech, to support whatever cause, and not be canceled,” she said. “We have this cancel culture that is threatening America, and the foundation of it is that Americans are afraid to speak out.”