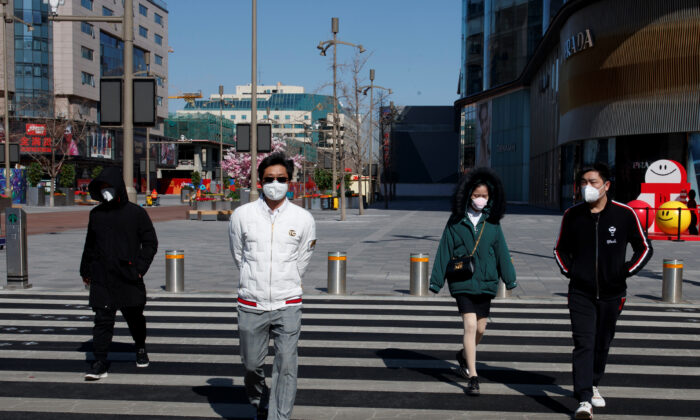 People wearing masks walk in a shopping street in Beijing, as the country is hit by an outbreak of the novel coronavirus, China, on March 3, 2020. (Thomas Peter/Reuters)
INSIDE CHINA

BEIJING—Chinese social media platforms began censoring references to coronavirus and keywords critical of the government’s handling of the infection as early as December, Toronto-based cyber research group Citizen Lab said in a report on Mar. 3.

Citizen Lab said the findings, gathered between December and February, suggest that companies “received official guidance” on how to manage virus content in the early stages of the outbreak, which expanded throughout the testing period.

Tencent and YY did not immediately respond to requests for comment on Tuesday.

Chinese social media companies are subject to strict laws requiring them to censor content that “undermines social stability” or is critical of the central government, controls that have tightened under Xi.

The Cyberspace Administration of China, which oversees online content laws, did not respond to a request for comment on Tuesday.

China’s censorship policies have come under scrutiny since the virus outbreak amid allegations from netizens and local media that they potentially obscured the seriousness of the outbreak in its early stages.

The report said YY added 45 key phrases to an internal blacklist, including “Wuhan Unknown Pneumonia” and “Wuhan Seafood Market” on Dec. 31, a day after eight people, including doctor Li Wenliang, raised an alarm about the virus in a WeChat group and were subsequently punished by police for “spreading rumors.”

Li died of the virus in early February, sparking a wave of public mourning and fierce criticism of local officials online.

The Citizen Lab report said keywords relating to Li were censored after his death in February, including combinations of the words “virus,” “Li Wenliang,” “central government,” and “epidemic.”

It said the group was able to collect a full list of newly-added blacklisted words from YY during the period, and a sample from WeChat based on attempted keywords and combinations.

Censorship rules are strictly enforced in China, and internet companies have faced service suspensions and fines in the past for failure to fully comply with them.