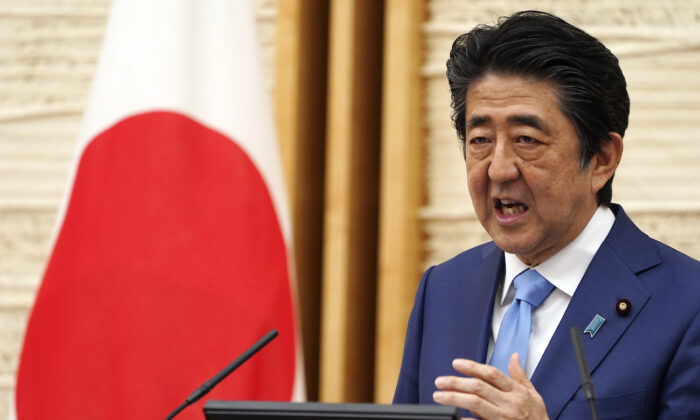 Japanese Prime Minister Shinzo Abe said on Friday he is resigning following concerns over his health, adding that he also wants to avoid causing problems to the government due to a worsening of his chronic health condition.

“It is gut wrenching to have to leave my job before accomplishing my goals,” Abe said at a press briefing Friday. “Faced with the illness and treatment, as well as the pain of lacking physical strength … I decided I should not stay on as prime minister when I’m no longer capable of living up to the people’s expectations with confidence.”

Abe, whose term ends in September 2021, is expected to carry on until a new party leader is elected and formally approved by the parliament. There are a slew of politicians eager to replace the 65-year-old prime minister.

Abe worked at his official residence every day during the summer to manage the CCP virus outbreak, commonly known as coronavirus—leading the government’s response and holding frequent news conferences before and during a state of emergency he declared in April.

But on Aug. 17, he visited Keio University Hospital for almost 8 hours, telling reporters that he was undergoing tests to maintain his health. He returned for the second time in two weeks on Aug. 24, saying he was getting a report on the test results.

While no further details regarding the nature of his illness have been shared, Abe suffers from ulcerative colitis—an inflammatory bowel condition that was partly blamed for cutting short his first term in office in 2007.

Chief cabinet secretary Yoshihide Suga said he had met Abe twice a day and had not noticed anything that indicated he was in poor health.

“I see him every day and I haven’t noticed anything different,” he said at the time.

He first became prime minister in 2006 before resigning after a year in office, in part because of the chronic bowel illness.

After stepping down, he said a drug was helping keep the problem in check. He has been in office since December 2012 in his second stint as prime minister.

Abe’s most recent public appearance came on Saturday, when he spoke at a ceremony commemorating the 75th anniversary of the end of World War II.

Shigeru Ishiba, a 63-year-old hawkish former defense minister, is a favorite next leader in media surveys, though he is less popular within the ruling party.

The Associated Press and reporter Lorenz Duchamps contributed to this report.