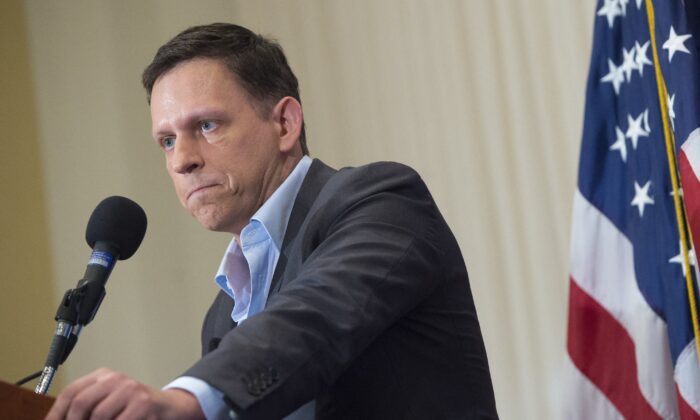 Tech billionaire investor Peter Thiel criticized major U.S. technology companies for being too cozy with the Chinese Communist Party (CCP) and called on them to undo their Chinese ties.

“Since everything in China is civilian-military fusion, Google was effectively working with the Chinese military, not with the American military,” Thiel said during an April 6 virtual roundtable hosted by the Richard Nixon Foundation. Former Secretary of State Mike Pompeo and former White House national security adviser Robert O’Brien also took part in the event.

Thiel is also a co-founder of PayPal and a member of Facebook’s board of directors.

He was referring to a decision by Google not to renew a Pentagon contract in 2018, which provides the U.S. military with artificial intelligence (AI) for analyzing drone video footage in a program called Project Maven. Google’s reason for not continuing the military project was that it didn’t support “the use of AI for weaponized systems.”

Also in 2018, Google decided to cooperate with China’s Tsinghua University on a new AI research body.

Tsinghua University was also named in the Pentagon’s 2020 report (pdf) on China’s military power for having laboratories affiliated with the Chinese military and ties to the CCP’s military-civil fusion strategy, which allows the communist regime to leverage commercial technologies for military development.

The State Department has warned on its website that the CCP strategy involves intellectual property theft in order to “achieve military dominance.”

Additionally, Tsinghua University is among more than 60 Chinese universities that are under the supervision of China’s State Administration of Science, Technology, and Industry for National Defense.

Thiel also said that he spoke to Google insiders and was told that the internet search giant decided to work with China because “they figured they might as well give the technology out the front door, because if they didn’t give it—it would get stolen anyway.”

In another conversation with some “Google people,” Thiel said he asked whether Google’s AI technology was being used by the Chinese regime to run concentration camps in the far-western Xinjiang region.

Thiel said he was told, “We don’t know and don’t ask any questions.”

“If you think of it ideologically or in terms of human rights or something like that, I’m tempted to say it’s just profoundly racist. It’s like saying that because they look different, they’re not white people, they don’t have the same rights.”

The CCP is committing genocide against Uyghur Muslims in Xinjiang, subjecting them to forced sterilization, forced abortion, torture, forced labor, and the removal of children from their families. The Chinese regime rounded up more than 1 million Uyghurs and is holding them in internment camps—facilities China touts as “vocational training schools.”

“Even though we are ahead of basic science of AI, China is willing to apply it and turn the entire society into a face recognition surveillance state that is far more intrusive and totalitarian than even Stalinist Russia was. That is something we are not willing to do,” Thiel said.

At Facebook, Thiel said it was difficult for the social media giant to take a tough stance on China because of its employee base—many of them were Chinese nationals. For instance, Thiel pointed to debates among employees about the Hong Kong protests in 2019.

“The employees from Hong Kong were all in favor of the protests and free speech, but there were more employees at Facebook who were born in China,” Thiel said.

“The Chinese nationals actually said that it was just Western arrogance and shouldn’t be taking Hong Kong’s side, and then the rest of the employees at Facebook sort of stayed out of it.

“But the internal debate felt like people were actually more anti-Hong Kong than pro-Hong Kong.”

Hong Kong’s pro-democracy movement began in June 2019 when millions took to the streets in protest against an extradition bill that would have allowed suspects in Hong Kong to be sent to China for trial. The movement eventually evolved into a greater call for democracy such as universal suffrage, but protests subsided in early 2020 as Hong Kong was hit by the pandemic.

CCP officials and China’s state-run media have portrayed Hong Kong protesters as a “small number of people,” among them “extremists,” “rioters,” and “violent radicals,” while touting that the “majority of Hongkongers” didn’t support the movement. What’s more, the Chinese regime has accused Western governments of “interfering” in its “internal affairs” for voicing support for the protesters.

Pointing to Facebook as an example, Thiel said some U.S. tech companies had a difficult time taking a hard stance against China because of how they saw themselves.

“There’s something about the ‘woke’ politics inside these companies, the way they think of themselves as not really American companies.”

To stop China’s infiltration into the U.S. tech sector, Thiel has one recommendation: “Keep putting a certain amount of pressure on Silicon Valley. You need to call people out on that relentlessly.”

“We need to call companies like Google out on working on AI with communist China not with U.S. military,” he said. “I think we should be putting a lot of pressure on Apple with its whole labor force supply chain on the iPhone manufacturing in China.

“Apple is one that has real synergies with China.”

The U.S. smartphone giant has made a number of controversial decisions related to China in recent years, including moving some of its iCloud data to China-based servers, pulling crowd-sourced app HKmap.live from its App Store, and Apple’s CEO Tim Cook being named the chairman of Tsinghua University’s School of Economics and Management.

The map app was popular among Hong Kong protesters to avoid direct confrontation with the Hong Kong Police, who have been heavily criticized for their violent handling of protesters.