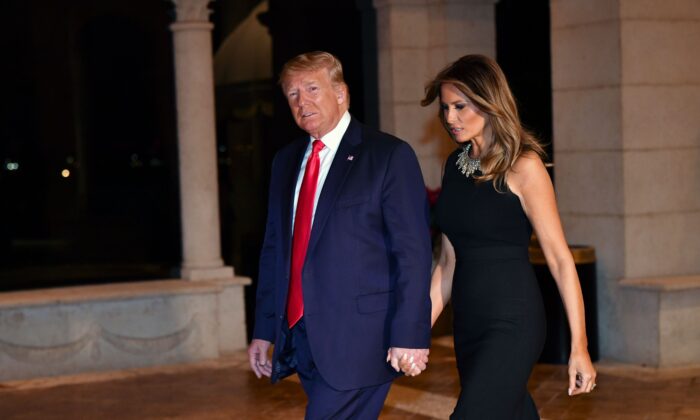 Then-President Donald Trump and First Lady Melania Trump arrive for a Christmas Eve dinner with their family at Mar-a-Lago in Palm Beach, Fla., on Dec. 24, 2019. (Nicholas Kamm/AFP via Getty Images)
US News

The town attorney for Palm Beach, Florida, said in a memo this week that Donald Trump can continue to live full time at the former president’s Mar-a-Lago resort.

John Randolph said in the document that Trump can be considered a bona fide employee of the resort; employees are defined in the town’s code as including business owners and partners.

“If he is a bona fide employee of the club, absent a specific restriction prohibiting former President Trump from residing at the club, it appears the Zoning Code permits him to reside at the club,” Randolph wrote.

The memo was obtained by The Epoch Times.

Trump turned Mar-a-Lago into a private club in 1993. During a Town Council meeting that year, Trump’s attorney at the time said that Trump wouldn’t “continue to live” on the property, “except that he will be a member of the club and would be entitled to use the guest rooms.”

Some have suggested the statement means Trump may only use the club as a member. Members are barred from residing at Mar-a-Lago for more than three non-consecutive seven-day periods per year.

But the final rules dictating the use of Mar-a-Lago didn’t include a direct prohibition on Trump residing there, Randolph said in his memo, prompting the need for the town to review its zoning code.

Trump lawyer John Marion said in a letter to the town last month obtained by The Epoch Times that Trump “has the right to reside there.”

“Importantly, while the town could have specifically provided in the agreement that the owner could not reside on the property, it did not,” he wrote.

The agreement states that the actual usage of Mar-a-Lago wouldn’t change. It said no new activity would occur which cannot, does not, or has not taken place in the past under the existing zoning of the property.

Since Trump lived at Mar-a-Lago prior to its conversion to a club, his residency was grandfathered in, his attorney suggested. Trump is, under the town’s zoning, a bona fide employee, his representatives believe.

Town Manager Kirk Blouin confirmed to The Epoch Times last week that the town is reviewing Trump’s residency at the property.

“Our town attorney, John Randolph, is reviewing the Declaration of Use Agreement and our Code of Ordinances to determine if former President Trump can live at Mar-a-Lago,” he said via email.

The Town Council is expected to take up the issue at a Feb. 9 meeting.

Trump bought Mar-a-Lago in 1985. He changed his permanent residence to Florida from New York in 2019.

A person living near the club alleged through a lawyer in late 2020 that Trump’s plans to begin residing at Mar-a-Lago full time after leaving office would violate the 1993 agreement.

“In order to avoid an embarrassing situation for everyone and to give the president time to make other living arrangements in the area, we trust you will work with his team to remind them of the Use Agreement parameters,” attorney Reginald Stambaugh wrote. “Palm Beach has many lovely estates for sale and surely he can find one which meets his needs.”