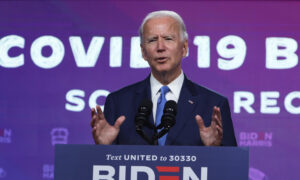 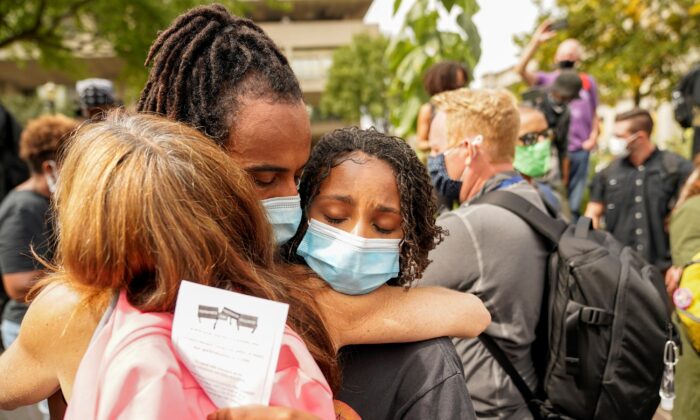 People react after a decision in the criminal case against police officers involved in the death of Breonna Taylor, who was shot dead by police in her apartment, in Louisville, Ky., Sept. 23, 2020. (Bryan Woolston/Reuters)
US News

One of the police officers involved in serving a search warrant to Breonna Taylor’s home in Louisville was indicted on Sept. 23, but the two others weren’t charged because their use of force was justified, Kentucky’s attorney general announced.

The officers knocked and announced their presence at Taylor’s home before entering, Kentucky Attorney General Daniel Cameron, a Republican, said at a press conference, repudiating months of false reporting that claimed the warrant was a “no-knock” one.

Because no one answered or opened the door, the officers breached the door.

Mattingly, the first and only officer to enter, encountered a male and a female standing next to each other at the end of the hall. The male was standing in a shooting stance and holding a gun. Mattingly saw the man’s gun go off and knew he was shot after feeling heat in his upper thigh.

The investigation found both Mattingly and Cosgrove “were justified in their use of force,” the attorney general said. “This justification bars us from pursuing criminal charges in Ms. Breonna Taylor’s death.”

Cameron led a team that examined evidence from the situation. Because there was no body camera footage, investigators spent thousands of hours piecing together what happened with ballistics evidence, 911 calls, police radio, traffic, and interviews, as well as details gleaned from the FBI, the state police, and local medical examiners.

The evidence was presented to a grand jury, which returned three counts of wanton endangerment against Hankison.

The counts stemmed from the jury’s belief that the officer put residents in a neighboring apartment in danger of serious physical injury or death.

He faces up to 15 years in jail if convicted.

Hankison was fired in June for violating police department rules.

Schroeder also said that Hankison violated the department’s rule on when to use deadly force.

There was no conclusive evidence that Hankison fired any of the shots, the attorney general’s team found.

Mattingly, Cosgrove, and Joshua Jaynes, a detective who obtained the warrant, were reassigned following the shooting. They are still with the force.

Walker told police he heard knocking but didn’t know who was coming into the home and fired in self-defense.

He was initially charged with attempted murder. That charge was later dropped.

Taylor’s family settled with the city for $12 million last week.

Louisville Mayor Greg Fischer, the mayor of Louisville, told a separate press conference earlier Sept. 23, “No matter what Attorney General Cameron announces, I urge everyone to commit once again, to a peaceful, lawful response.”

Louisville officials declared a state of emergency on Sept. 22 ahead of the decision on whether to charge any of the officers.

A group of several hundred people began marching downtown after Cameron’s announcement. Chants included, “No justice, no peace.” Some were smashing windows, according to video footage from downtown.