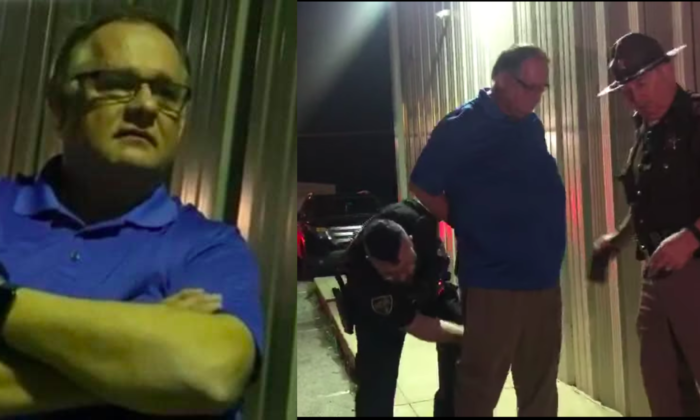 The head of a public school board in Ohio resigned on Sunday after a video posted online showed him being confronted and eventually arrested by police in Indiana for an alleged child sex crime.

“A video posted Saturday evening on YouTube shows John Gray, Goshen Local Schools board president, being handcuffed by law enforcement in Indiana. The content of the video is deeply disturbing to our entire school district and Goshen Local School community,” the district said in a statement on its website.

The 83-minute video, titled “60 Year old President of Goshen OH school board, meeting an 11 y/o,” was uploaded to YouTube Saturday night by a group called “Predator Catchers Indianapolis” (PCI). The group describes themselves as volunteers who work to expose predators and protect children.

According to PCI, Gray traveled about three hours from Cincinnati for a meet-up with the girl he had been messaging. The video starts off with Gray being confronted inside a Dollar General store by a woman who claims to be the girl’s mother, while a male PCI member films their interaction.

“How old was the girl you were talking to?” the woman can be heard asking Gray, who responds by saying, “I guess she said she was 12 or 13. Something like that.” Gray also tries to plead his innocence by claiming he has “no intention of doing anything” to the girl.

The woman then asks Gray about his conversations with the girl, to which the man replied, “Just hanging out.” When she says she has read some of the “very sexual” messages they exchanged on Kik, a mobile messaging app, Gray alleges that he hadn’t meant to talk about anything sexual, but the girl kept bringing it up because “maybe this is what she’s looking for.”

Gray also admitted telling the girl that she has “kissable lips” and that he would like to “kiss and cuddle her.” He claims that he got the girl’s number from someone else who told him “she needed help” and he told her that “just to make her feel better.”

The woman points out Gray has suggested the girl get down to her underwear for a massage. She then asks Gray how he would stop himself from going any further if he and the girl ended up meeting as planned. “I can’t get an erection. I don’t have that problem,” Gray replies.

In another disturbing admission, Gray says he did tell the girl he wanted to rub her private part and be called “grandpa” by her. “Only if she wanted,” he says. “But I can’t. There no way I can have intercourse.”

The video ends with police officers arriving at the scene and taking Gray into custody. On Sunday, Goshen police confirmed that they were at Gray’s house and he was taken to the hospital for a psych evaluation.

Goshen Local Schools said Gray was serving his fifth term with the district at the time of his resignation.

“To be clear, Saturday’s incident occurred outside of the Goshen Local School district. Our district leaders will be consulting with legal counsel and should more information become available, we will communicate it to our families immediately,” the district said.