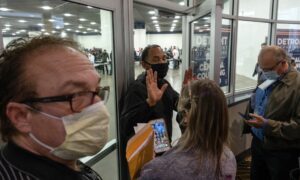 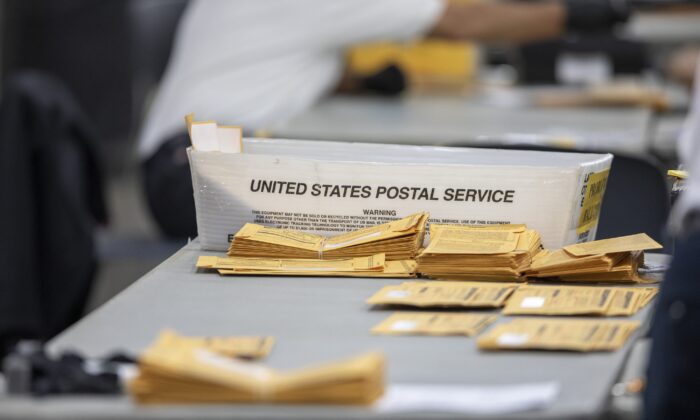 Absentee ballots at the Central Counting Board sit on a desk as they wait to be processed in the TCF Center in Detroit, Mich., on Nov. 4, 2020. (Elaine Cromie/Getty Images)
Michigan

Antrim County Clerk Sheryl Guy initially said what happened appeared to be a combination of a software glitch and human error.

Officials are now saying it’s solely because of human error.

“The error in reporting unofficial results in Antrim County Michigan was the result of a user error that was quickly identified and corrected,” Michigan Secretary of State Jocelyn Benson, a Democrat, said in a statement over the weekend.

“However, because the county did not update the media drives for the tabulators that did not have changes to races, those tabulators did not communicate properly with the county’s central election management system software when the county combined and reported unofficial results. Every tabulator recorded ballots correctly but the unofficial reports were erroneous.”

The finding was based on a preliminary review from the Bureau of Elections, an office inside Benson’s agency.

Benson referred to what happened as an “honest mistake.”

In a press release, Guy said: “The clerk’s office has traced the cause of the original errors on the posted unofficial election results. Late in the election preparation process, a minor correction was made to a ballot that caused additional compounding changes to how the software totals and presented the data. The skewed unofficial results were a result of procedural misunderstanding that the clerk’s office had never before experienced.”

A spokeswoman for Guy’s office told The Epoch Times on Monday that they had nothing further to add.

Election Source and the Antrim County clerks are working to set new policy and procedures so the same thing doesn’t happen again.

Antrim County uses Dominion Voting Systems voting machines, as well as its election management system. Dominion has not responded to requests for comment. The company said in a statement to news outlets that “there are no credible reports or evidence of any system software errors in Georgia or Michigan, including erroneous reporting of unofficial results from Antrim County, Michigan.”

Michigan GOP Chairwoman Laura Cox told reporters last week that what happened was a software glitch, citing Guy’s initial explanation, before saying the same software appeared to have been used in 47 counties in the state.

“These counties that use this software need to closely examine their results for similar discrepancies,” she said.

The Michigan Republican Party later said it was expanding its probe into what happened.

The state Board of Canvassers said it will investigate what happened in Antrim County.

“We will look at that after the election,” Julie Matuzak, a board member, told a local broadcaster. “We will audit all of the results and if people point out problems we’ll try to figure out what those problems were.”