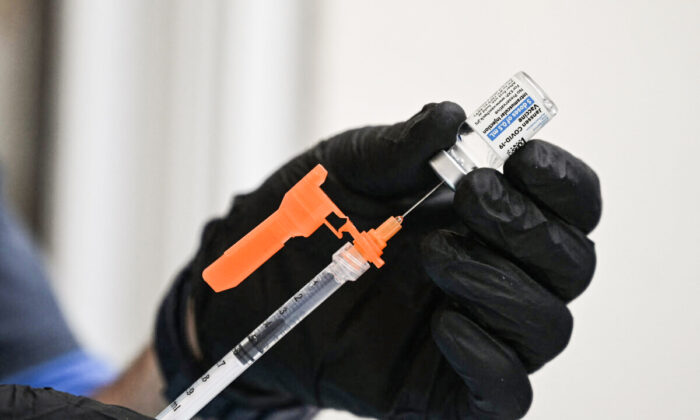 A nurse fills a syringe with Johnson & Johnson's Janssen Covid-19 vaccine at a clinic hosted by The Tournament of Roses in partnership with the Pasadena Public Health Department, August 19, 2021 at Tournament House in Pasadena, California. - The clinic is one of the first in the city to offer "supplemental" third Covid-19 shots to people with immunological conditions, according to organizers. President Joe Biden said August 18 he will make Covid-19 booster shots available to all American adults beginning next month, as his administration warned that vaccines are showing a declining effectiveness against infection. (Photo by Robyn Beck / AFP) (Photo by ROBYN BECK/AFP via Getty Images)
Vaccines & Safety

Hospitals around the nation earlier this year began imposing COVID-19 vaccine mandates, but employees were told they’d meet the requirements if they received the single-shot Johnson & Johnson (J&J) vaccine.

That’s changed at a New Jersey hospital, where employees now must get a booster if they received the single-shot jab.

University Hospital in Newark on Wednesday announced employees have until Dec. 24—Christmas Eve—to get an additional vaccine dose.

Per federal guidance, the workers can choose from any of the three COVID-19 vaccines authorized in the United States, including J&J. Drug regulators last week said Americans could mix and match booster shots.

Workers who got the Moderna or Pfizer vaccine do not need to get an additional shot at this time, though hospital leadership did not rule out a future widening of the booster mandate.

“Data and analysis indicate that a single dose of the Johnson & Johnson vaccine may no longer confer a level of effectiveness that prevents COVID-19 infection in enough of our employees if they are exposed, which has implications on our ability to keep vulnerable patients and families safe,” Dr. Shereef Elnahal, president and CEO of University Hospital, said in a statement.

The hospital said that so-called breakthrough infections, or cases of COVID-19 among those deemed fully vaccinated—including, at least previously, people who had gotten the J&J shot—have been rising in health care workers across the nation.

This is due to the Delta variant of the CCP (Chinese Communist Party) virus and waning immunity from the initial vaccination, the hospital said.

University Hospital appears to be the first healthcare facility in the nation to mandate booster shots.

Health authorities also said that people no longer have to continue with the same vaccine they originally got, and many experts say J&J recipients should consider getting a Moderna or Pfizer booster. Limited data indicate that course would give bolstered protection, though J&J says a booster of its own vaccine boosts immunity as well.