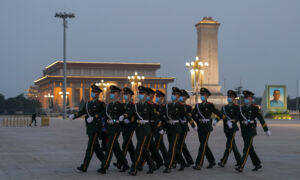 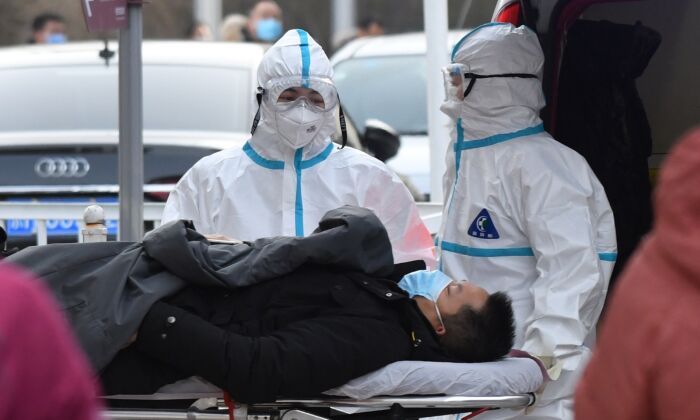 Medical workers deliver a patient to the fever clinic at a hospital in Beijing, on Jan. 13, 2021. (GREG BAKER/AFP via Getty Images)
CCP Virus

An outbreak of the CCP virus in Heilongjiang Province is quickly spreading, despite authorities’ attempts to contain it.

The virus’s resurgence, occurring throughout parts of northern China, has resulted in millions being locked down at home, while tens of thousands of suspected patients were moved to quarantine centers.

Heilongjiang authorities said the latest outbreak, traced to a pregnant woman and her 10-year-old son, has already infected hundreds within the past three days. After the woman tested positive for COVID-19 at a hospital in Wangkui county, Suihua city, authorities said she caused outbreaks in Harbin, Mudanjiang, Qiqihar, and Yichun cities.

On Jan. 13, the neighboring province of Jilin reported that its local outbreaks originated among people who had recently traveled to Wangkui county.

The Jilin Health Commission announced that people who took the same train, worked in the same office, or resided in the same neighborhood as the travelers soon contracted the disease.

For example, a couple that traveled to Changchun city from Wangkui via train tested positive. At least three passengers who were in the same train car as the couple but hadn’t visited Wangkui later tested positive.

The situation in the current virus hotspots of the cities of Xingtai and Shijiazhuang in Hebei Province remains serious. On Jan. 13, the National Health Commission arranged for 11 medical teams from across China to travel to Hebei and assist in epidemic prevention efforts.

The province’s blood center also announced that it had a shortage of platelets—the key blood component that forms clots and stops bleeding.

Some COVID-19 patients in serious condition may need to be put on a heart-lung machine known as ECMO to provide respiratory support; a related surgical procedure would require a blood transfusion.

On Jan. 13, the Shanxi, Zhejiang, and Xinjiang governments stated that their outbreaks were traced back to Shijiazhuang.

Shandong Province announced that it also detected an asymptomatic carrier (Chinese authorities count them separately from those who present clinical symptoms) who had recently traveled to Wangkui.

Meanwhile, Guizhou, Hubei, Guangxi, and Shaanxi provinces, as well as Tianjin city, quarantined up to thousands of people, claiming that they were identified as close contacts of patients from Hebei, Heilongjiang, Liaoning, and Beijing—all regions that currently have severe outbreaks.

Some netizens questioned how the virus could spread so quickly, even as local authorities usually implement draconian lockdown measures soon after cases are detected.

The Hebei government hasn’t yet identified the patient zero who first ignited the latest wave of COVID-19. But it claims that the virus strain originated from Europe.

During a press conference on the national situation held by the central government in Beijing, the deputy director of China’s Center for Disease Control and Prevention denied speculation that a new mutated virus strain is spreading in China. Feng Zijian added that he believes the outbreaks across the country are controllable.

The Chinese Communist Party convenes meetings every year known as the Two Sessions; the central government and local officials announced their schedules in December last year.

But with the ballooning outbreaks, on Jan. 11, Hebei said the meetings, originally planned for Jan. 25, would be postponed.

Last year, the national Two Sessions meetings were postponed due to the pandemic; this year’s meetings are planned for March 4–5.

The Party elites who attend the meetings are relatively old and hence, are vulnerable to COVID-19.

The average age of currently diagnosed COVID-19 patients in Hebei is 50, the central government said.