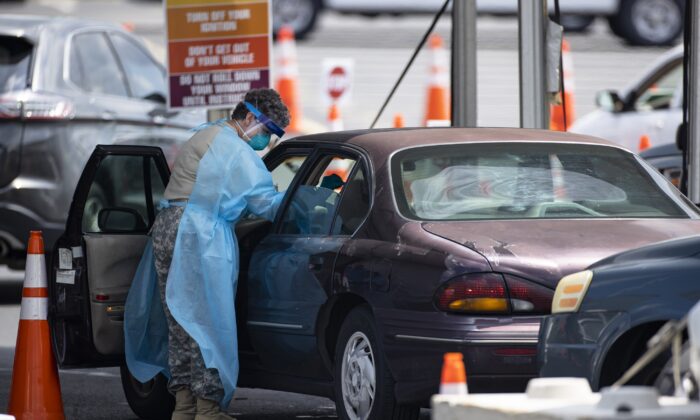 Officials in Nashville on Thursday disputed emails that a local news station said showed authorities withheld COVID-19 data because of the low number of cases confirmed to have come from bars or restaurants, even as a member of Congress requested information about the alleged shielding of figures.

The emails were sent between a senior adviser to Democrat Mayor John Cooper and the Metro Health Department. They were published by WZTV.

According to the emails, the tracing of case origins found as of June 30 that bars and restaurants were the origin of just 22 cases, compared to over 1,000 in nursing homes.

A month later, a reporter for Tennessee Lookout asked the health department about the number of cases that were traced back to bars and restaurants.

Health department official Brian Todd forwarded the query to five other officials, asking how he should respond.

The name of who responded was chopped off, but the person who wrote back said: “My two cents. We have certainly refused to give counts per bar because those numbers are low per site. We could still release the total though, and then a response to the over 80 could be because that number is increasing all the time and we don’t want to say a specific number.”

Councilman Steve Glover told WZTV that he confirmed the emails were authentic with a staff attorney for the health department.

Mayor John Cooper’s press secretary, Chris Song, said Thursday that the WZTV story “was published with limited information and without context, using screenshots of Metro emails to falsely accuse the Mayor’s office and the Metro Public Health Department of withholding public health data that had previously been shared with and published by another local news outlet, the Tennessee Lookout, on August 4th, 2020.”

Cooper’s office published three emails that it said showed the office and health officials “have remained committed to providing timely, transparent access to vital public health data.” One showed Eagles on July 29 directing officials to disclose that over 80 cases had been traced back to clusters at bars.

Rep. Mark Green (R-Tenn.) sent a letter to Cooper on Thursday, saying the emails showed a “disturbing discussion to conceal crucial information from the public” about the COVID-19 pandemic.

Cooper was confronted over the emails during a Sept. 17 virtual press conference.

“I think the question comes with a concern that back when we were modifying phase two, that the bar case count was not at that time super high. And I think what you’re hearing is that kind of story out in the community, that the bar case count was not super high,” he said, adding later: “The fact that back in early July, you didn’t have a super high case count at that moment doesn’t mean that it was not a national health priority. And then let’s look at what happened, from Los Angeles to Miami: Everybody adopted the same protocol.”

Cooper then attacked a WZTV reporter after disclosing he’d asked the station to submit a public records request regarding the veracity of the emails, accusing the reporter of having “a lapse in journalistic judgment and due diligence.”

The reporter fired back: “When you call after the newscast and say, gee, we wish you would have asked again, I mean, this isn’t high school. You’re not asking a girl out on a date again who said no. If you don’t have a comment up front, we don’t have to come and ask you again an hour later. We have deadlines that I’m asking you now. So here’s a chance to answer.”

The back-and-forth continued with the reporter saying a city attorney verified the emails in one hour and the mayor saying the reporter should have followed up with his office.

“Come see me. We’ll get to the bottom of this,” Cooper said.

He also said he was grateful “to all the bars and restaurants have stepped up their efforts to protect the health and safety of their patrons” as he allows the establishments to fill with 50 percent capacity or 50 people per floor and 50 people outside starting Friday.