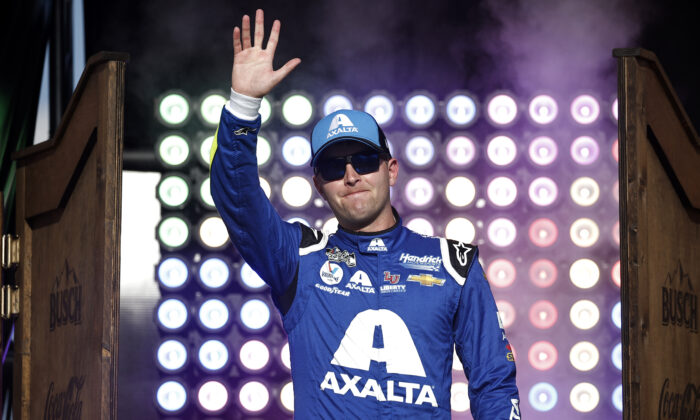 William Byron, driver of the #24 Axalta Chevrolet, waves on stage during driver intros prior to the NASCAR All-Star Race at Texas Motor Speedway in Fort Worth, Texas, on June 13, 2021. (Chris Graythen/Getty Images)
Sports

By Alex Andrejev
From The Charlotte Observer

NASCAR is back to racing with points on the line this weekend at Nashville Superspeedway after completing its All-Star Race last Sunday at Texas Motor Speedway.

Below are The Charlotte Observer’s NASCAR power rankings for the week of June 14. This list is updated each week.

—Kyle Busch (no change) has four top-10 finishes in a row, including the All-Star Race, and won the Xfinity race at Texas Motor Speedway last Saturday, so Busch remains in the same spot as last week, but now behind four Hendrick Motorsports drivers.

—Alex Bowman (previously unranked) finished sixth at the All-Star Race, ahead of Busch’s ninth-place finish. While not too much weight can be placed on the non-points event with the wacky format, Bowman hasn’t finished lower than ninth, at Sonoma, in the last five races (since his win at Dover), which is better than Busch’s lowest finish in those same events (27th at Dover and 10th at Circuit of the Americas).

—3. William Byron (+1) dropped a spot after crashing out at Sonoma, but he led laps at the All-Star Race and finished seventh, to make Sonoma look more like a fluke than a pattern. Byron moves back into the top-three and Martin Truex Jr. gets bumped from the list this weekend after a 13th-place finish Sunday.

—2. Chase Elliott (no change) finished third at the All-Star Race and the No. 9 team posted the fastest pit stop during a late round to win a $100,000 bonus in the event. Elliott hasn’t finished lower than third in the past five races. The only problem for Elliott is that neither has teammate Kyle Larson.

—1. Kyle Larson (no change) is on a streak that includes three wins in the past three events and three second-place finishes in the three races prior to that. Larson passed Elliott to lead the final laps of the All-Star Race, then held off Brad Keselowski to win the event and a $1 million prize. After sweeping all stages at the Coca-Cola 600 and Sonoma, and then winning again last Sunday, it’s no surprise he’s still No. 1 in our rankings.