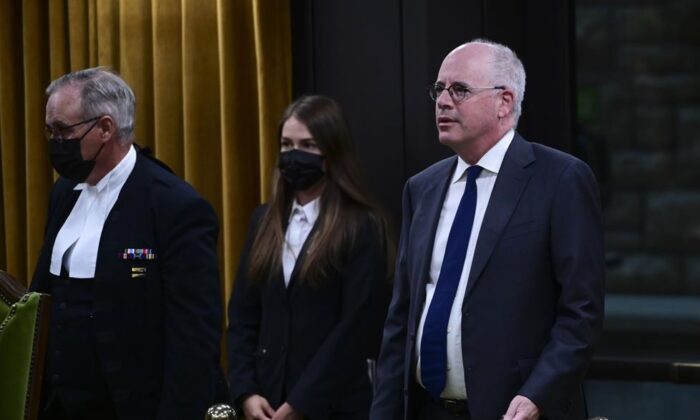 President of the Public Health Agency of Canada Iain Stewart, right, approaches the bar in the House of Commons to be admonished by the Speaker of the House of Commons Anthony Rota on Parliament Hill in Ottawa on June 21, 2021. (The Canadian Press/Sean Kilpatrick)
Viewpoints

Xiangguo Qiu was “a long-time federal civil servant when the patents were registered in 2017 and 2019 for innovations related to the Ebola and Marburg viruses, key focuses of her work at Winnipeg’s National Microbiology Laboratory (NML),” according to Blackwell’s article. Qiu shipped a load of the deadly pathogens from the NML to the Wuhan Institute of Virology (WIV), a likely source of the virus that causes COVID-19.

Canadian government employees cannot file a patent outside the country without permission from the health minister. The Public Health Agency of Canada (PHAC) refused to disclose whether Qiu had obtained such permission and whether the PHAC was even aware of the patents. The whereabouts of Qiu and her husband Keding Cheng are unknown and the Royal Canadian Mounted Police (RCMP) will not disclose if they know where they are.

As CTV News reports, PHAC President Iain Stewart “refused to provide further paperwork containing more details related to why scientists Xiangguo Qiu and her husband, Keding Cheng, were removed from [NML] in July 2019 and then later fired by the agency.”

Canadian officials called it a policy breach but others see a case of espionage related to biological warfare. The “main culprit” behind the breach is Qiu, according to “China and Viruses: The Case of Dr. Xiangguo Qiu,” a January 2020 paper from the Begin-Sadat Center for Strategic Studies (BESA).

According to the paper, the “outstanding Chinese scientist” came to Canada for graduate studies in 1996 and until recently headed the Special Pathogens program at the NML. Since 2006, Dr. Qiu has been “studying powerful viruses—Ebola most of all—at the NML.” The viruses that were “surreptitiously shipped from the NML to China” include Machupo, Junin, Rift Valley Fever, Crimean-Congo Hemorrhagic Fever, and Hendra.

“China and Viruses” author Dr. Dany Shoham, a microbiologist and expert in biological and chemical warfare, says Dr. Qiu “maintains a close bond with China and visits frequently, and many Chinese students from a notable range of Chinese scientific facilities have joined her at the NML over the past decade.” Of those facilities, four are believed to be involved in Chinese biological weapons development: the Institute of Military Veterinary, Academy of Military Medical Sciences, Changchun; Center for Disease Control and Prevention, Chengdu Military Region; Wuhan Institute of Virology, Chinese Academy of Sciences, Hubei; and the Institute of Microbiology, Chinese Academy of Sciences, in Beijing.

One of the graduate students Qiu and Cheng brought to the NML, Radio Canada reports, was Feihu Yan, from the People’s Liberation Army’s (PLA) Academy of Military Medical Sciences. PHAC spokesperson Eric Morrissette declined to answer questions about Yan’s work at the sensitive Winnipeg lab.

Security expert Christian Leuprecht of Canada’s Royal Military College and Queen’s University told Radio Canada that “China has a very active, very aggressive and extremely dangerous bioweapons program. So all the research that’s being generated here could easily be reappropriated by the Chinese authorities to advance rather nefarious causes.” And “It appears that what you might well call Chinese agents infiltrated one of the highest prized national security elements when it comes to biosecurity and biodefence.”

Qiu and Cheng were last seen publicly in February 2020. They have been absent from their Canadian properties, reportedly worth nearly $2 million. According to former co-workers, Dr. Qiu has bragged about owning a mansion in China. If the RCMP has any clue where Qiu and Cheng might be, they aren’t saying, and on all fronts, Canadian officials are withholding crucial documents.

Dr. Qiu holding Chinese patents “should be a cautionary tale,” University of Windsor professor Myra Tawfik, a specialist in intellectual property, told The National Post. On the prospect of espionage related to biological warfare, Canadian Health Minister Patty Hajdu claimed, “We will never put Canadians’ national security at risk.” If Canadians thought their government had already done so it would hard to blame them.