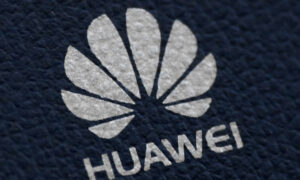 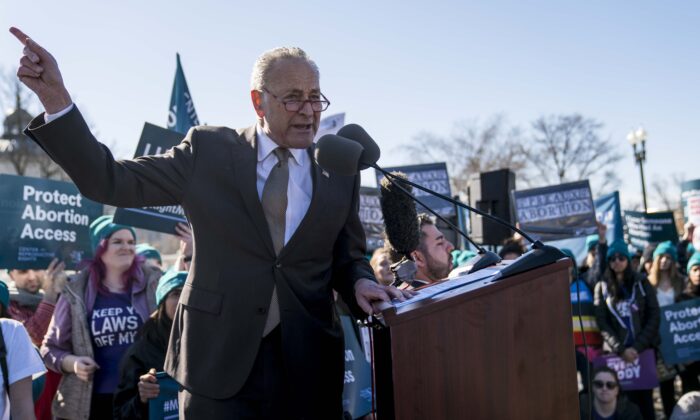 “I want to tell you, Gorsuch, I want to tell you, Kavanaugh: You have released the whirlwind, and you will pay the price. You won’t know what hit you if you go forward with these awful decisions,” Schumer said on March 4 in a speech to pro-abortion activists outside the Supreme Court in Washington. Justices Neil Gorsuch and Brett Kavanaugh sit on the nation’s highest court.

After being admonished by Chief Justice John Roberts, Schumer claimed he was referring to Republican senators instead of the justices he named.

Schumer “prompted a crowd of left-wing activists to boo two of the associate justices, as though Supreme Court Justices were professional athletes and Sen. Schumer were jeering from the stands,” McConnell said in Washington a day after the comments were made. The Republican senator then quoted the threat his Democratic counterpart made.

“There is nothing to call this except a threat and there is absolutely no question to whom it was directed,” McConnell said. “He literally directed the statement to the justices by name and he said, quote, if you go forward with these awful decisions, which could only apply to the court itself.

McConnell said the fact the rally was outside the justices’ workplace contributed to the seriousness of the situation.

“If any American had these words shouted at them from the sidewalk outside their office they would hear those threats as personal and most likely they would hear them as threatening or inciting violence,” McConnell alleged.

Schumer’s comments were “astonishingly reckless” and “completely irresponsible,” McConnell said. He then said he agreed with Roberts, who called them dangerous. “No matter the intention, words carrying the apparent threat of violence can have horrific, unintended consequences,” the Republican said.

Roberts said in a statement on Wednesday: “Justices know that criticism comes with the territory, but threatening statements of this sort from the highest levels of government are not only inappropriate, they are dangerous. All members of the Court will continue to do their job, without fear or favor, from whatever quarter.”

Schumer was not threatening the Supreme Court justices but referring to “the political price” that Republican senators “will pay” for confirming Gorsuch and Kavanaugh to the court, a spokesman told The Epoch Times.

Responding on the Senate floor, Schumer said McConnell made a “glaring omission” in his speech. “He did not mention what the rally yesterday, my speech, or the case before the court was about: a woman’s constitutional right to choose.”

Schumer said he was fighting for women’s right to choose to get an abortion.

“I feel so passionately about this issue, and I feel so deeply the anger of women all across America about Senate Republicans and the court working hand-in-glove to take down Roe v. Wade,” Schumer said.

Schumer said he is “angry.”

“I should not have used the words I used yesterday. They didn’t come out the way I intended to. My point was that there would be political consequences—political consequences—for President Trump and Senate Republicans if the Supreme Court, with the newly confirmed justices, stripped away a women’s right to choose,” he said.

“Of course I didn’t intend to suggest anything other than political and public opinion consequences for the Supreme Court and it is a gross distortion to imply otherwise.”

The comments drew widespread criticism, including from harsh critics of Republicans.

“I hope the Senator, whom I’ve long admired and consider a friend, apologizes and takes back his implicit threat. It’s beneath him and his office,” Tribe, who frequently criticizes McConnell and President Donald Trump, said in a statement.

Neal Katyal, a lawyer who has presented cases to the Supreme Court, and another frequent critic of Republican leaders, also called on Schumer to apologize. “We shouldn’t let Trump destroy decorum and respect across the board,” he wrote on Twitter.

Sen. Susan Collins (R-Maine) was among the lawmakers issuing statements condemning the remarks, calling them “outrageous.”

Schumer’s “angry words … have no place in our political discourse,” Kay James, president of the conservative Heritage Foundation, added in a statement.

“He’s trying to impose his will through intimidation, but our nation’s leaders should never threaten others. It’s time to let our Supreme Court justices do their job,” she said.

McConnell on Thursday highlighted past statements from Democratic lawmakers questioning the legitimacy of the Supreme Court and trying to influence justices into voting for their preferred outcome on cases.

“I would suggest my Democratic colleagues spend less time trying to threaten impartial judges and more time coming up with ideas that are actually constitutional,” he said. The “silver lining” of Schumer’s statement, he said, was a reminder to people of the importance of judicial independence.