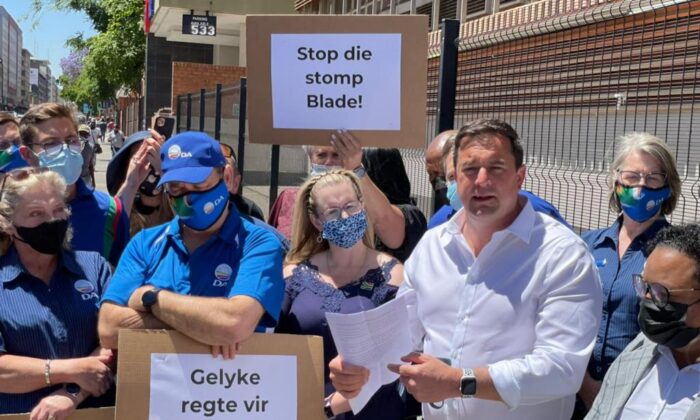 JOHANNESBURG—Nelson Mandela said he “loved” Afrikaans, even though it was the language of the people who imprisoned him for 27 years during apartheid. One of the closest friends he made in prison on Robben Island was a white Afrikaans warder, whom Mandela credited with improving his Afrikaans immensely.

But now, on the eve of local government elections that threaten to further loosen the African National Congress’s (ANC) nearly three-decade grip on South Africa, a leader of the ANC has demonized Afrikaans as the lingo of apartheid.

Blade Nzimande, South Africa’s education minister, says Afrikaans is a “white, foreign, European language of privilege” that should no longer be used as a medium of instruction at South African universities.

Nzimande banned its use at the state-funded University of South Africa (UNISA), but the country’s apex Constitutional Court recently ordered him to reinstate it by 2023, emphasizing that “references to Afrikaans as a ‘white man’s language’ are erroneous and inconsistent with history.”

Defenders of Afrikaans have waded in.

“The court, while acknowledging that Afrikaans was undeniably employed as a tool of oppression in the past, continued to recognize that the language is now a heterogeneous, rainbow language spoken by many South Afrikaans, the majority who are black people,” Andre Gaum, a member of the South African Human Rights Commission, told The Epoch Times.

“On that basis, the court declared that Afrikaans deserves protection and promotion in our country.”

Nzimande, however, has stuck to his anti-Afrikaans guns, saying he’s consulting with his legal team to find a way to “circumvent” the Constitutional Court ruling.

He recently told South African media that there was a “narrow preoccupation” on Afrikaans, and “neglect” of the nine other official languages “that had been suppressed and deliberately underdeveloped under colonialism and apartheid.”

According to statistics released in 2016 by the government, almost 7 million South Africans speak Afrikaans as their first language, and around 15 million use it as their second tongue.

South Africa has a population of almost 60 million.

An Attack on ANC Opponents

Van Wyk, backed by international organizations such as the United Nations Educational, Scientific and Cultural Organization, says Afrikaans is an African language.

“Yes, Afrikaans sounds most like Dutch. But it originated in the mouths of slaves brought from Southeast Asia to work for white colonists, including Dutch-speaking farmers.

“Words like ‘brood,’ which is the Afrikaans for ‘bread,’ come from Malaysia; it was brought here by the slaves. So, you have this interaction between slave and colonist, and that is how the language was formed.”

In South Africa, the descendants of those slaves call themselves “coloreds,” or people of mixed race. According to the latest government census, they number 5 million and chiefly reside in the Western Cape, the only province out of nine not controlled by the ANC.

“Coloreds don’t vote ANC because the ANC doesn’t consider us to be ‘black enough’ to be ‘indigenous,’” said Roy Carelse, a self-employed welder in Cape Town, the region’s biggest city. “We’re excluded from affirmative action policies that give top jobs to blacks; the ANC considers us to be gemors [rubbish],” he said.

What’s further infuriating Afrikaans communities, white and black, is the government’s exclusion of the language from a list of indigenous languages in its new Language Policy Framework for Public Higher Education Institutions.

“This exclusion is unscientific, contrary to the Constitutional Court’s ruling in the UNISA case, and hurtful and hateful towards the diverse Afrikaans-speaking language community,” says the opposition Democratic Alliance in a media statement.

The Freedom Front Plus (FF+), the only mainstream political party in the country that brands itself “proudly Afrikaans,” says the attack on the language is a “populist move” by the ANC to win black votes on Nov. 1, when South Africans elect town and city councils.

“The ANC attacks minorities before every election,” FF+ leader Pieter Groenewald told The Epoch Times. “Afrikaans speakers are a minority, and, of course, white Afrikaners carry the baggage of apartheid, so they’re an easy target. The attack on our language is just another way for the ANC to distract people from their corruption and mismanagement.”

The ruling party certainly appears to be in big trouble as the vote looms: There are protests around South Africa against lack of delivery of basic services by ANC-controlled municipalities, several top officials are facing criminal charges, including fraud and murder, and brutal infighting has seen several ANC members shot dead, allegedly assassinated by rivals vying for positions on candidate lists.

As it all rages, so too does Nzimande, who insisted without evidence that Afrikaans is being used as a “means of exclusion and oppression … to pursue a narrow and racist, right-wing nationalist agenda, as was the case under apartheid.”

He declined to be interviewed by The Epoch Times.

Leaning on the rusted gate outside his dilapidated home in the Johannesburg suburb of Eldorado Park, a toothless Jan Pieterse scoffed as ANC volunteers used cable ties to secure party election posters to nearby lampposts.

“They don’t understand my language, and I don’t understand theirs,” he said. “But there is one Afrikaans word that all South Africans understand, and that’s ‘voertsek.’ The ANC must voertsek; there are no votes for ANC people here!”

Voertsek is an old, impolite Afrikaans word meaning “go away.” It can’t be classified as swearing, but it’s pretty close.