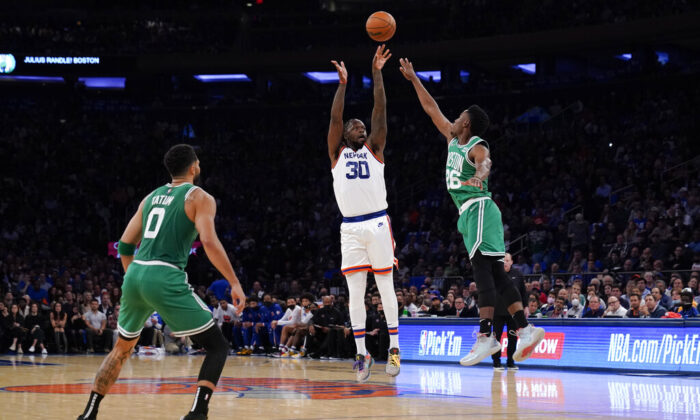 The Knicks were led by Julius Randle with 35 points on Wednesday night. Evan Fournier also added 32 points against his former Celtics.

For visiting Boston, Brown was unstoppable with a career-high of 46 points. This may be considered rather remarkable as he was just cleared to play having recovered from testing positive on Oct. 8 for the CCP (Chinese Communist Party) virus, which causes the disease COVID-19. He had minor symptoms and thus was able to train in isolation.

Brown told ESPN, “I feel pretty good for the most part. Just coming off being in quarantine and ramping the intensity level, there’s obviously concerns, risk of injury, and things like that. Some of the coaches are concerned it might be too soon, just because this is the NBA.” Following the game, he said, “My breathing felt irregular but fine for the most part.  Toward the end I could feel my heart beating through my chest. It would have been better if we got a win.”

Boston controlled much of the first half taking the lead, 14–13, with 7:39 remaining in the first quarter.  The largest lead was by 12 points, 50–38, with 7:06 remaining in the half.  New York took a defensive stand and held Boston to 50 points for nearly six minutes, and led by two points with 1:57 remaining before halftime. However, Boston came back to take the halftime lead 58–54.

After being down most of the third quarter, the Knicks regained the lead with 1:04 remaining; and increased it to 11 with 4:28 left in the game. Boston however was able to make their own defensive stand, allowing Marcus Smart to hit a last-second 26-foot three-pointer to tie the game, at 116, to end regulation.

The overtimes were close with Boston having a slight edge until Knicks Fournier made a 26-foot three-pointer to take the final lead with 56 seconds left in the second overtime; the game ended 138–134.

Fournier remarked about the game, “It was crazy!” The Madison Square Garden crowd was treated to an exciting opener; and the fans responded with frantic energy and cheers throughout.

The Knicks had six players in double figures. Other contributors include RJ Barrett who scored all 19 points in the second half. Obi Toppin had his Knick career-high of 14. Mitchell Robinson added 11, Kemba Walker had 10, and Derrick Rose scored nine.

New York made the playoffs last year for the first time since 2013 under new coach Tom Thibodeau.

Outside of Brown, Boston starters all contributed double-digits, ranging from 15–20 points. Jayson Tatum scored the 20, and had an excellent opportunity to win the game at the end of the first overtime; but missed a 15-foot jumper with 1.8 seconds remaining.

Boston’s next game will be at home against Toronto on Friday, and the Knicks shall travel to play Orlando on Friday as well.