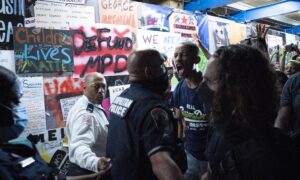 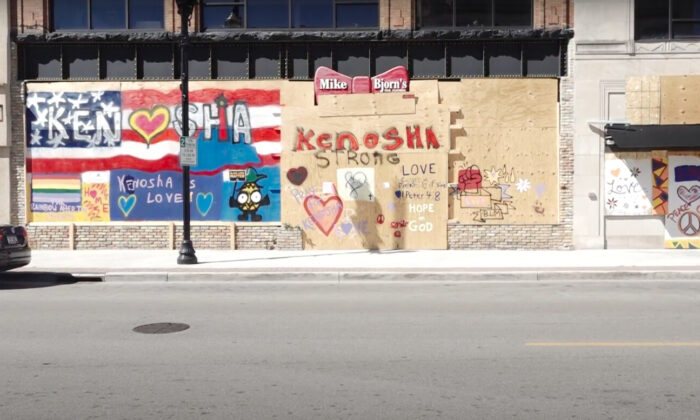 KENOSHA, Wis.—More than two dozen stores in the business district of Kenosha, Wisconsin, have been forced to close because of recent unrest in the city, but some business owners are still optimistic that things will turn around.

Businesses in this particular area—located downtown within walking distance from the Kenosha County Courthouse—were targeted by rioters last week. Some were set on fire, many were broken into, while a few lucky ones remained untouched.

At least 90 percent of all stores in the area were fully boarded up.

Kelly Deem, owner of Elsie Mae’s Canning and Pies, said that it wasn’t the people of Kenosha burning their own city to the ground, adding that their community is “very supportive to each other, very tolerant of different views.”

Her store was one of just a handful that were left unscathed by the unrest and remained open for business.

“We live here together in one city and know how to communicate different views without leaning towards violence, so we were very saddened to see people from other cities come in and take a lot of negative actions towards our town,” Deem told The Epoch Times.

“The feeling is just heartbroken. We have been downtown for nearly 10 years,” she said. “Seeing my neighbors coming in on Monday morning just being overwhelmed with the smell of smoke from burning buildings, the car dealership getting burnt to the ground.”

Out of the 175 recent arrests in Kenosha, 100 of the people were from out of town, according to Attorney General William Barr.

“These are the same people using the same tactics that have been used in various cities: Washington, Atlanta, Chicago, now Kenosha, Portland,” Barr said at a Sept. 1 roundtable in the city.

Deem said the most important thing they can do is be there for their neighbors and to “stay strong and positive and see this through.” She urged everyone to come together in a positive way, noting that the rioters want to see drastic changes right away and that they are driven by raw emotions.

“Our message is very clear: You take all of that raw anger and unrest, and you put it into something that’s positive—good deeds,” she said. “Hopefully, that will be the tide that turns us around.

“All of this negative, all of this burning, it’s not going to send the message that you want. If you want to see real change, put that kind of energy into something that’s positive and see if you don’t get your message out a little faster, a little stronger, and with a lot more support,” she continued.

She described how some of the neighboring businesses lost in 35 seconds what the owners had taken 10 years to build.

Deem said, however, that once the National Guard arrived, “we were not afraid of our businesses being destroyed any further.”

She also felt it was important that President Donald Trump came to see what was happening firsthand.

“I am appreciative that [Trump] is open to having dialogues with places that this is happening at,” she said. “Everyone has to come and meet. The governors need to meet with the president; these need to be conversations that are happening.”

Another business owner, who requested anonymity for privacy reasons, said it was sad to see that people have lost the ability to sit down and talk.

“Right away, everybody takes sides,” the owner, whose store has been in the area for 100 years, told The Epoch Times. “You’re not supposed to—you’re supposed to join in the middle.”

The owner said he was optimistic that the mayor, governor, and president will come together to make things work, adding that it can’t continue the way that it is.

He also felt that the recent riots wouldn’t have happened or at least not to the extent they did if the governor had been quicker to accept National Guard assistance.

“This would not have happened because when [the National Guard] came in on Wednesday—boom, it stopped,” the owner said.