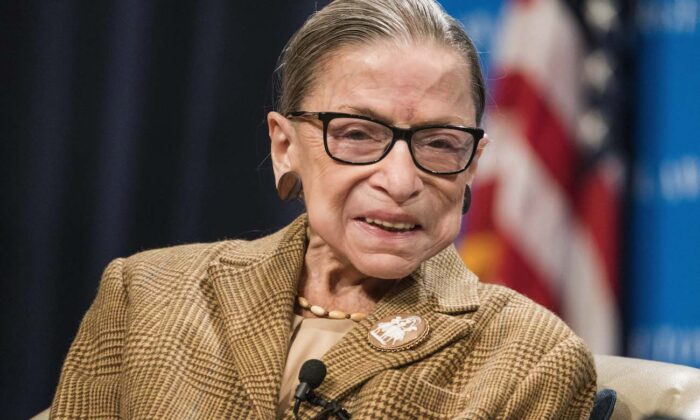 “Our nation has lost a jurist of historic stature. We at the Supreme Court have lost a cherished colleague,” Chief Justice John Roberts said in a statement. “Today, we mourn, but with confidence that future generations will remember Ruth Bader Ginsburg as we knew her—a tireless and resolute champion of justice.”

A private service for the deceased justice will be held at Arlington National Ceremony in Virginia.

Ginsburg was appointed to the court in 1993 by former President Bill Clinton.

Ginsburg dictated a statement to her granddaughter Clara Spera while on her deathbed: “My most fervent wish is that I will not be replaced until a new president is installed,” Ginsburg told Spera, reported NPR. It’s not clear if that meant until after the November election is over or if President Donald Trump is reelected and leaves office in 2025.

Ginsburg’s death now gives Republicans and Trump the opportunity to add another judge to the Supreme Court, which had a 5-4 conservative majority prior to Ginsburg’s death.

Senate Majority Leader Mitch McConnell (R-Ky.) said in a statement Friday evening that “the Senate and the nation mourn the sudden passing of Justice Ruth Bader Ginsburg,” and that “President Trump’s nominee will receive a vote on the floor of the United States Senate.”

Ginsburg spent her final years on the bench as the unquestioned leader of the court’s left wing and became something of a star to her admirers. Young women especially seemed to embrace her, calling her the “Notorious RBG” on Twitter.

Her health issues included five bouts with cancer beginning in 1999, falls that resulted in broken ribs, insertion of a stent to clear a blocked artery, and other hospitalizations after she turned 75.

Trump on Sept. 9 expanded the list of judges and others he’d choose from if a vacancy on the Supreme Court arose, adding 20 people.