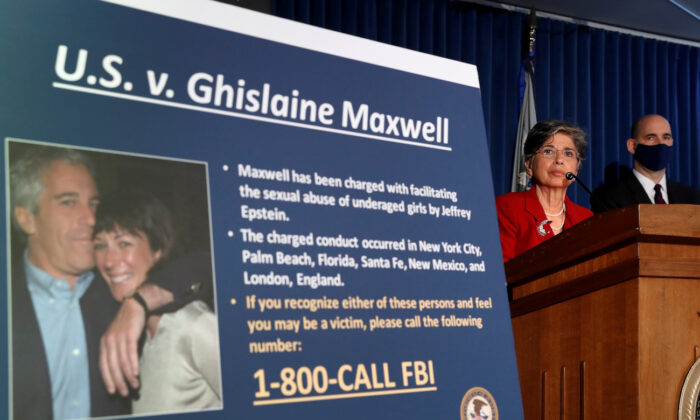 Audrey Strauss, Acting United States Attorney for the Southern District of New York, speaks alongside William F. Sweeney Jr., Assistant Director-in-Charge of the New York Office, at a news conference announcing charges against Ghislaine Maxwell for her role in the sexual exploitation and abuse of children by Jeffrey Epstein in New York City, New York, on July 2, 2020. (Lucas Jackson/File Photo/Reuters)
Crime and Incidents

Judge Rules to Unseal Documents in 2015 Lawsuit Against Ghislaine Maxwell

NEW YORK—Ghislaine Maxwell, the former associate of late financier Jeffrey Epstein, suffered dual setbacks in a U.S. court on Thursday, as a judge authorized the release of new materials related to her, while another judge refused to block prosecutors and lawyers from publicly discussing her criminal case.

U.S. District Judge Loretta Preska in Manhattan directed the release of large portions of more than 80 documents from a 2015 civil lawsuit against Maxwell, the British socialite now facing criminal charges that she lured girls for Epstein to sexually abuse.

The materials ordered unsealed include flight logs from Epstein’s private jets, testimony from depositions in 2016 in which Maxwell’s lawyers said she was asked “intrusive questions” about her sex life, and police reports from Palm Beach, Florida, where Epstein had a home.

Maxwell, 58, is being held in a Brooklyn jail after pleading not guilty last week to charges she helped Epstein recruit and eventually abuse girls from 1994 to 1997, and committed perjury by denying knowledge of his abuse in depositions.

Preska said the presumption the public had a right to access the documents outweighed Maxwell’s arguments to keep them under wraps, including that they concerned “extremely personal” matters whose release could prove embarrassing or annoying.

The judge gave Maxwell one week to file an emergency appeal, but said both sides should proceed as though the documents will be made public “within a week.”

Nathan, who oversees the criminal case, said a gag order was not needed to protect Maxwell’s right to a fair trial, but that she “will not hesitate” to act if needed.

Epstein was arrested in July last year and pleaded not guilty to separate sexual abuse charges. He was found hanged on Aug. 10 in his jail cell at age 66, in a death ruled a suicide.

Before his arrest, Epstein had socialized over the years with many prominent people, including Britain’s Prince Andrew, U.S. President Donald Trump and former President Bill Clinton.

The documents that Preska ordered unsealed were part of Virginia Giuffre’s defamation lawsuit against Maxwell, which was confidentially settled in 2017.

Giuffre has accused Epstein of sexually abusing her when she was underage, and Maxwell of aiding in the abuse. Maxwell has denied her claims.

Some information, including the names of “non-parties” and other Epstein accusers who have not publicly revealed their identities, will remain redacted.

Laura Menninger, a lawyer for Maxwell, told Preska the appeal reflected the “great concerns” Maxwell might not get a fair criminal trial if more information about her past became public, “given the intensity and the scrutiny” surrounding her.

Some records from the Giuffre case, including parts of Maxwell’s deposition testimony, were unsealed the day before Epstein died, and one day after he executed his will.

Epstein reached a nonprosecution agreement with U.S. prosecutors in Miami in 2007, and pleaded guilty the following year to Florida prostitution charges, rather than face federal sex trafficking charges.

He was sentenced to 13 months in jail, and the nonprosecution agreement is now widely seen as too lenient.