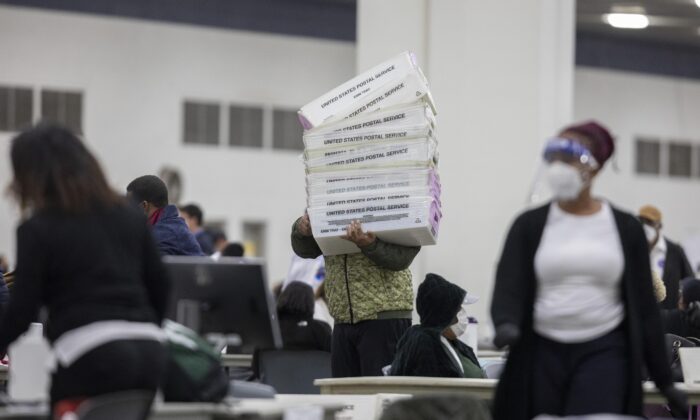 A judge in Michigan on Monday permitted parties in a court case to release the results of a forensic imaging examination of Dominion Voting Systems machines, with redactions of code.

The 23-page report was published soon after by Allied Security Operations Group. It includes expert analysis from Russell Ramsland, a former Republican Party candidate who works with the group.

13th Circuit Judge Kevin Elsenheimer agreed to remove a protective order that was blocking the release of the report on the request of attorney Matthew DePerno, after attorneys with Secretary of State Jocelyn Benson’s office said they didn’t oppose doing so.

DePerno pushed for the removal in a court hearing, saying the order was meant to be temporary and it had achieved its purpose of preventing him from releasing information on the imaging before Benson’s office had an opportunity to review it.

“We believe that public interest in seeing what we discovered and what we say in the report would outweigh any potential harm to Dominion software,” DePerno told the court.

He argued that confirming the accuracy of the electoral process is a greater public interest in this case than any potential issues related to Dominion software and that the company had an opportunity to intervene in the case but did not do so.

Erik Grill, an assistant attorney general, criticized the lawyer for giving an interview late last week in which he asserted Benson lied, saying doing so essentially violated the protective order.

He also asserted that DePerno distributed the report to outside parties, pointing to lawyers in a separate case alerting the U.S. Supreme Court of new evidence filed in DePerno’s case.

DePerno said he did not share the report with any other parties.

Benson doesn’t oppose the distribution of the report, provided the secretary of state can release its counterargument, Grill added.

An Antrim County attorney said it didn’t oppose the release, as long as the county is similarly allowed “to explain the several errors that we believe are contained in the preliminary report,” which he said was based on “faulty assumptions and incorrect assumptions.”

Benson and Antrim County Clerk Sheryl Guy have said what happened was due to human error.

“The error in reporting unofficial results in Antrim County Michigan was the result of a user error that was quickly identified and corrected,” Benson said in a statement last month.

But the new suit said many questions remain unanswered, including whether Dominion tabulators in the county were tampered with, whether they have the capacity to connect to the Internet, and whether they had any open VPN ports during the election.

The judge earlier this month allowed Bailey’s attorney and experts he brought in to examine the machines. They conducted a forensic examination.

Elsenheimer had at the same time issued a protective order, blocking the release of the results of the examination.