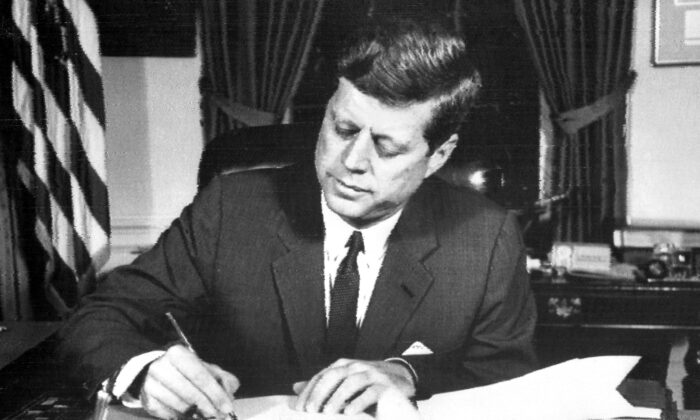 U.S. President John F. Kennedy signs the order for a naval blockade of Cuba on Oct. 24, 1962, during the Cuban Missile Crisis. (AFP via Getty Images)
US News

Two of former President John F. Kennedy’s nephews are calling on the Biden administration to release the final documents pertaining to his assassination in 1963 after the White House announced last week that it was delaying releasing them due to the COVID-19 pandemic.

The records were set to be made public on Tuesday, but the White House released a memo on Oct. 22 stating that it would delay their publication until at least Dec. 15.

In the memo, the White House said the National Archives and Records Administration has concluded that the COVID-19 pandemic has had “a significant impact on the agencies” and that they require additional time to consult with government agencies to determine how much more information about the assassination can be released.

Following the memo, Robert F. Kennedy Jr. told Politico that the government’s delay in releasing the remaining documents is “an outrage.”

“It’s an outrage against American democracy. We’re not supposed to have secret governments within the government,” he said. “How the hell is it 58 years later, and what in the world could justify not releasing these documents?”

His cousin, former Rep. Patrick Kennedy (D-R.I.), said the records should be released because the American people have a right to know about “something that left such a scar in this nation’s soul that lost not only a president but a promise of a brighter future.”

“I think for the good of the country, everything has to be put out there so there’s greater understanding of our history,” Patrick Kennedy said.

John F. Kennedy, the 35th president of the United States, was killed on Nov. 22, 1963 while riding in a motorcade through Dealey Plaza in downtown Dallas, Texas.

Lee Harvey Oswald, who had recently been hired to work at the Texas School Book Depository, was arrested by officials and formally arraigned for his murder, as well as the murder of police officer J.D. Tippit, whom he allegedly shot on the same day.

Oswald was later shot and killed by gunman Jack Ruby while being held in Dallas police headquarters. Ruby, a nightclub owner, told police that revenge over Kennedy’s murder was the motive for his action. He was later charged with first-degree murder.

The records consist of more than 5 million pages of assassination-related records, photographs, video footage, sound recordings, and artifacts, according to the National Archives.

The documents were finally set to be declassified in 2017, but then-President Donald Trump postponed the release for four years, citing national security concerns.

However, in 2018 Trump did approve the release of 19,045 documents, of which roughly 15,000 have some redactions, that are available on the National Archives website.

President Joe Biden has continued Trump’s policy of shielding the records, despite himself serving in the U.S. Senate when the John F. Kennedy Assassination Records Collection Act of 1992 was unanimously passed in Congress.

The White House said in a statement to Politico that the “public will have access to a tranche of previously withheld records and redacted information withheld in previously released records” and that the “Biden administration is setting up a whole-of government effort to ensure the maximum possible disclosure of information by the end of 2022.”