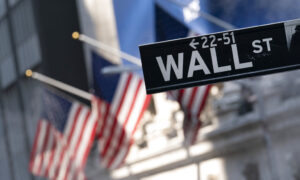 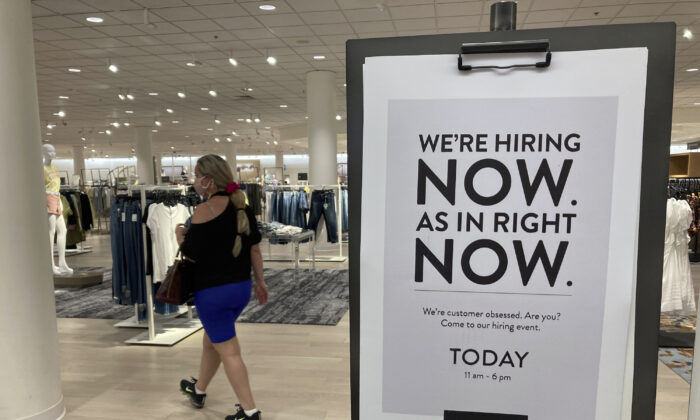 A customer walks behind a sign at a Nordstrom store seeking employees, in Coral Gables, Fla., on May 21, 2021. (Marta Lavandier/AP Photo)
Economies

Jobless Claims Rise Above Expectations to Highest Level in a Month

The number of U.S. workers who filed for unemployment rose above expectations last week to the highest level in a month, new government figures show.

First-time filings for unemployment insurance—a proxy for layoffs—came in at 351,000 for the week ending on Sept. 18, an increase of 16,000 from the previous week’s revised level of 335,000, the Labor Department said in a statement (pdf). That’s the highest number of weekly claims since the week of Aug. 21, when it reached 354,000. The consensus forecast cited by FXStreet was for 320,000 claims.

“Hoped for progress on new claims for jobless benefits was not to be in the latest snapshot, posting a second straight weekly increase,” Bankrate Senior Economic Analyst Mark Hamrick told The Epoch Times in an emailed statement.

“Part of the explanation behind the increase is seen with significant jumps coming from California and Virginia, providing a total of 37,000 new claims. At the same time, hurricane-battered Louisiana posted a decline.”

Continuing claims, which run a week behind the headline number and represent people continuing to collect benefits after earlier making an initial filing, rose by 131,000 to 2,845,000. The prior week’s continuing claims number touched a pandemic-era low.

The jobless claims figures come a day after the Federal Reserve concluded its routine two-day policy meeting, where officials voted to keep interest rates at near zero. However, they also raised their expectations for rate increases and signaled that the central bank could “soon” slow its pace of monthly bond purchases, suggesting a mix of optimism about the pace of economic recovery and fear that easy money policies would fan the flames of inflation.

The Fed released updated economic projections showing that policymakers think inflation will run hotter in 2021 than previously expected, though they continue to believe price pressures will moderate in 2022. September’s updated economic growth projections also saw notable downward revisions for 2021 while getting a lift for 2022. Expected declines in unemployment were also downgraded.

“As the Federal Reserve’s collective economic forecasts released yesterday suggested, further progress on the unemployment rate may not be as promising this year as earlier hoped, largely as the Delta variant pushes some economic activity into the future,” Hamrick said. “The Fed’s Summary of Economic Projections looks for 4.8 percent unemployment by year-end, instead of the forecast in June of 4.5 percent. It looks for matching the pre-pandemic low of 3.5 percent in 2023.”

Speaking at a press conference following the conclusion of the policy meeting, Fed Chairman Jerome Powell acknowledged the persistence of inflationary risks.

“As the reopening continues, bottlenecks, hiring difficulties, and other constraints could again prove to be greater and longer-lasting than anticipated, posing upside risks to inflation,” he said.

At the same time, Powell argued that much of the upward pressure on prices is the result of pandemic-related supply-side bottlenecks and shortages and once again made the case for transitory inflation.

“These bottleneck effects have been larger and longer-lasting than anticipated,” he said.

“While these supply effects are prominent for now, they will abate. And as they do, inflation is expected to drop back toward our longer-run goal” of around 2 percent.