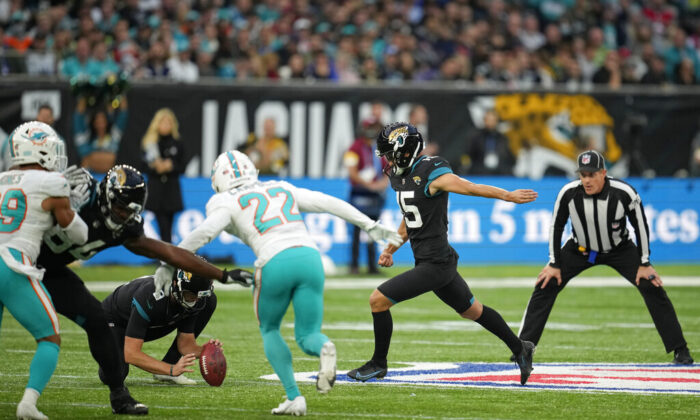 Jacksonville Jaguars kicker Matthew Wright #15 (2nd R) kicks a field goal during the second half of an NFL football game between the Miami Dolphins and the Jacksonville Jaguars at the Tottenham Hotspur stadium in London, England, on Sunday, Oct. 17, 2021. (Matt Dunham/AP Photo)
NFL

The Jacksonville Jaguars ended their 20-game losing streak in spectacular fashion, with a game-winning field goal to defeat the Miami Dolphins 23–20 on the last play. The game was played in Tottenham Hotspur Stadium on Sunday, Oct. 17.

The Jaguars’ last victory was 399 days prior, against the Indianapolis Colts in the first game of the 2020 season.

Jaguars kicker Matthew Wright hit a 53-yard field goal as the time expired. The opportunity for the attempt resulted from the offense calling a “slider” play that advanced the ball nine yards. Operating on the Miami 44-yard line on a fourth-down needing 8 yards to move the chains, Jacksonville positioned the offense at the line of scrimmage as if they were going for a long pass.  However, quarterback Trevor Lawrence was able to complete a short 9-yard pass to Laviska Shenault, and Head Coach Urban Meyer immediately called a time out with one second remaining.

That play was just enough to enable the 53-yard attempt by Wright. Just a few minutes before, he’d made a 54-yarder to tie the game at 20–20. Wright finished with a perfect total of three field goals out of three attempts.

Jacksonville’s long-time kicker, Josh Lambo, was the most accurate kicker in the history of the franchise. Since 2017, his percentage was an outstanding 91.6 percent. From a range of over 50 yards, he was also impressive, making 12 of 15 in his career.

However, Lambo had a hip injury last year that twice placed him on injured reserve. He has since recovered from the injury, but his confidence appears to have wavered. This year he has missed both of his attempts over 50 yards.

The Jaguars used five other kickers since last year and signed Wright to the practice squad on Sept. 27. They had other opportunities to possibly win this season, but were unsuccessful in making a single field goal in the first five games. Coach Meyer stated on Monday that Wright “had earned the right to be the starting kicker right now.”

“There’s no bad blood between either of us,” Wright said. “We’re both here to do the job, and we’re just competing, and he’s been really helpful, actually, with everything because he’s had quite a long, successful career, so he’s had some wise words for me.”

The winning field goal prompted jubilant celebration from the entire team, as they ran on the field following Wright to the end zone to congratulate him.

Coach Meyer is a legend in college football, winning three championships total with the University of Florida and Ohio State University. He was hired to bring success to the Jaguars.

So both Meyer and Lawrence won their first game in the NFL. If, and how quickly, they succeed will be the big question; but the pedigree is there.

After the celebration in a post-game interview, Meyer said, “I really enjoyed that locker room after the game. I think I enjoyed that more than the actual game.” He said that emotionally, it compared to a championship win.