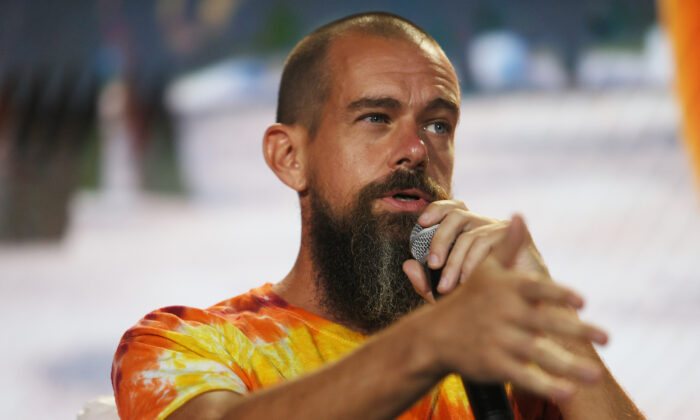 Jack Dorsey, co-founder of Twitter and Square, speaks on stage at the Bitcoin 2021 Convention, a crypto-currency conference held at the Mana Convention Center in Wynwood, in Miami, Fla., on June 4, 2021. (Joe Raedle/Getty Images)
Grassroots Resistance

As the international community increasingly turns away from the Chinese Communist Party, former Twitter CEO Jack Dorsey appears to be joining the trend.

“End the CCP,” he wrote on Aug. 6 on the platform he co-founded.

The three-word message, which was shared more than 2,200 times and received 12,400 likes in three hours, was in response to a video in June highlighting the toll of China’s “zero-COVID” policies. The timing also coincides with growing momentum for a grassroots movement calling for people to cut ties with the regime.

As of Aug. 3, more than 400 million Chinese people in mainland China and overseas have joined the movement, renouncing their membership with the CCP or its affiliated organizations, according to data compiled by the New York-based Global Tuidang Center, which focuses on encouraging people to renounce their oath to the Party. Many of them used aliases to protect themselves from reprisals.

A petition organized by the Tuidang Center to rally support to “end CCP” has collected over 2.5 million signatures.

Beijing’s zero-tolerance approach to COVID-19 has led authorities to lock down entire cities over a single positive case. Such moves have restricted people’s movement and given rise to starvation and death from lack of medical care in a modern city such as Shanghai.

In late July, major technology hub Shenzhen ordered manufacturers, including Apple suppliers, into a week-long “closed loop” production, barring workers from leaving the factories. In central Henan Province, a city of 1.6 million went under lockdown after one local was diagnosed with COVID-19. Public transportation halted, and all shops, with the exception of grocery stores, pharmacies, and hospitals, were ordered to close.

Called “tuidang” in Chinese, the movement to “quit the Party” was inspired by the editorial series “Nine Commentaries on the Communist Party,” first published in the Chinese language edition of The Epoch Times in 2004.

In Taiwan, a Shandong man who appeared to be about 20 to 30 years old recently told a Tuidang center volunteer that living through the lockdown has helped push him from being an ultra-nationalist to quitting a Party affiliate.

After testing positive for the virus, he was locked inside his apartment, not allowed to go out for food or work, and consequently lost his job, according to Bai Dexiong, a local coordinator.

A number of residents from Shanghai have recently shared their statements with The Epoch Times in which they explained why they chose to withdraw from the Party.

“We had nothing to fill our stomach during the Shanghai outbreak, but what CCTV showed was always ample supplies and happy people,” three Shanghai locals wrote, referring to the Chinese state-run broadcaster. “‘Shame’ is not a word in the CCP’s dictionary.”