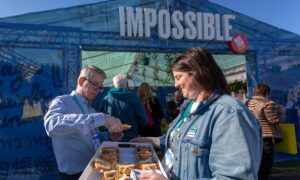 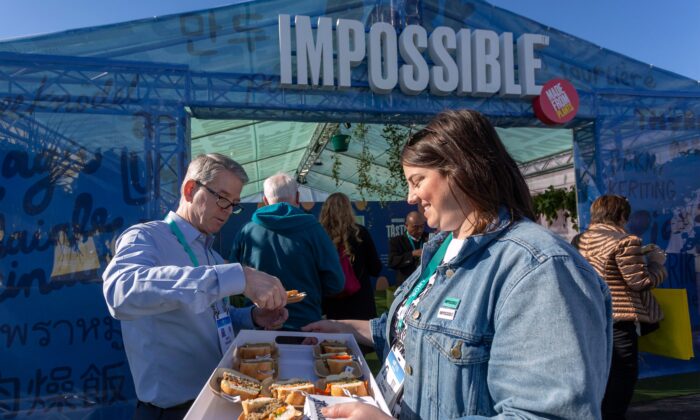 Impossible Foods to Launch Meatless Pork in US This Week

Impossible Foods will begin rolling out its new meatless pork in the United States this week as it seeks to make a footprint in the growing plant-based protein market, the company announced on Sept.23.

The California-based company said Chef David Chang will debut Impossible Pork at his famed Momofuku Ssäm Bar in New York City on Thursday, while the meatless product will be available in restaurants in Hong Kong starting on Oct. 4 and in Singapore later this fall.

Other restaurants across Hong Kong and the United States can also order the new plant-based pork for their menus from major foodservice distributors.

Impossible Foods has high hopes for the new product, which it says is “designed to be more delicious and far more sustainable while satisfying every culture and cuisine.”

A recent blind taste test of more than 200 consumers in Hong Kong conducted by Impossible Foods found that the meatless pork product was preferred to ground pork from pigs by 54 percent of consumers, who rated it on everything from likability to flavor and texture.

Primarily made from soy, the meatless pork is certified gluten-free and contains no nitrates, no animal hormones, and no antibiotics. It also has fewer calories than U.S. Department of Agriculture ground pork, and 59 percent less fat, and zero milligrams of cholesterol.

“Pig typically isn’t regarded as a healthy product, but here you have a substitute that tastes just as good but is actually better for you,” Impossible Foods’ president Dennis Woodside told CNBC.

“Earlier this month, we beat the animal with the launch of Impossible Chicken Nuggets,” Woodside said in a statement. “With Impossible Pork, we’re beating the animal again while satisfying even more types of cuisine—another important step towards making the global food system much more sustainable.”

The launch comes shortly after Reuters reported in April that Impossible Foods was preparing to go public with an initial public offering (IPO) in the next 12 months—which could value the company at around $10 billion or more—or for a merger with a so-called special purpose acquisition company (SPAC).

It also comes amid growing demand among consumers for more plant-based food options in an industry reportedly worth $4.3 billion in 2020.

Earlier this week, findings released by The Humane League, a global animal protection nonprofit, showed that more than 90 percent of U.S. store-brand chickens have the muscle disease known as “white striping” as a result of being bred for rapid growth.

The muscle myopathy causes stripes to appear on the chickens when they are unable to keep up with the unnaturally fast muscle growth, which can also create problems with blood and oxygen flow.

As a result, the chickens replace muscle tissue with fibrous tissue and fat, which subsequently reduces the nutritional value of the meat by increasing the fat content by 224 percent and giving lower protein levels by 9 percent.