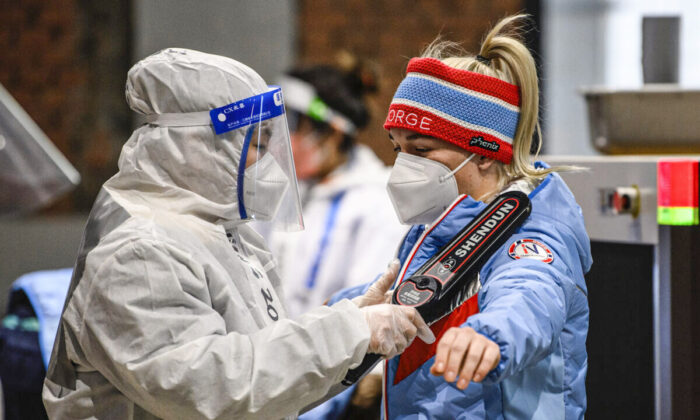 A member of Team Norway goes through security after arriving at the Olympic Village ahead of the Beijing 2022 Winter Olympic Games on Feb. 1, 2022. (Anthony Wallace - Pool/Getty Images)
Beijing 2022 Olympics

Winter Olympic athletes who tested positive for COVID-19 have had enough of Beijing’s quarantine hotels.

“My stomach hurts, I’m very pale, and I have huge black circles around my eyes. I want all this to end. I cry every day. I’m very tired,” Russian biathlon competitor Valeria Vasnetsova said on Instagram from one of the hotels.

A picture she posted on Feb. 3 shows a tray of plain pasta, orange sauce, charred meat on a bone, a few potatoes, and no greens. That had been her “breakfast, lunch, and dinner for five days,” she said.

Vasnetsova said she was starving because it was “impossible” to eat much of the food, and she was surviving on a few bites of pasta.

“Today I ate all the fat they serve instead of meat because I was very hungry,” she said, noting that she was losing so much weight that her “bones are already sticking out.”

Vasnetsova said she believed athletes were getting worse fare than others. She shared a photo of food served to her team doctor living two floors below her who had also tested positive. The meals consisted of fresh fruit, a salad, and prawns with broccoli.

“I honestly don’t understand, why is there this attitude to us, the athletes?!” she said.

Vasnetsova was far from the only one complaining. Unpalatable food or the sheer scarcity of it, along with hygiene and others issues have made Beijing’s Winter Olympic quarantine hotels the target of criticism.

More than 350 Olympic participants have tested positive for COVID-19 upon arriving at China’s capital since Jan. 23. To get out of quarantine, athletes need to be symptom-free and present two negative tests 24 hours apart.

When Eric Frenzel, a Nordic combined skier who has won three Olympic gold medals, headed into an isolation room after testing positive on Feb. 4, his team quickly found the conditions there to be “unacceptable.”

Cleanliness, the quality of food, and WiFi conditions all need immediate improvement, Germany’s team chief Dirk Schimmelpfennig told reporters on the following day. He noted that the team has been in “intensive talks” with the International Olympic Committee (IOC) and Beijing Winter Olympic organizers.

“The hotel room is unacceptable, so we will have to find a way to change this,” Schimmelpfennig said from the Olympic Village in Zhangjiakou, Hebei Province. “These hotels were not shown to us in advance, and we have the situation that the athletes rightly ask for improvement.”

The public attention has worked in the athletes’ favor. After Belgian skeleton star Kim Meylemans’s tearful social media video about being transported to a second quarantine location when she thought she was going to be released, the IOC intervened, and she was given a room to self-isolate inside the Beijing Olympic Village.

Meylemans said on Feb. 3 that she felt “safe” after getting back to the village.

“It seems like the video and especially also the efforts of my Olympic committee have really paid off,” she said in an Instagram video.

Meal conditions for Vasnetsova appear to have improved as well, according to Sergei Averyanov, the spokesperson for her team.

Vasnetsova “is already smiling, and that’s the main thing,” Averyanov wrote in a social media post.