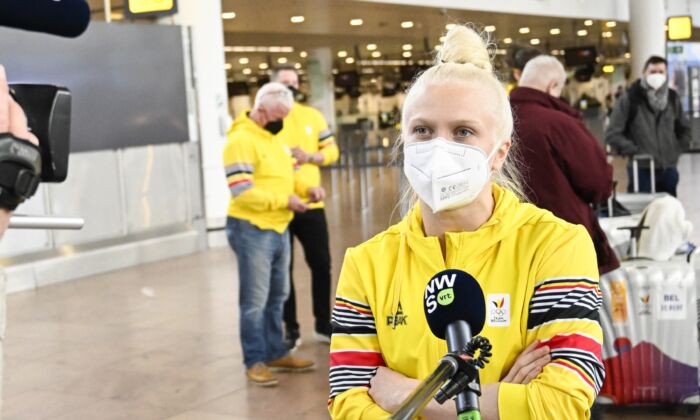 Belgian skeleton star Kim Meylemans, in a tearful social media video on Feb. 2, said she was placed in isolation after being quarantined for three days despite a number of negative COVID-19 tests, and worried that she couldn’t participate in the competition.

The 25-year-old provided an update on Feb. 3, saying that after the IOC’s involvement, she was given a room at the Beijing Olympic Village.

“I am now in a wing that is just as isolated but at least I’m back in the village. I feel safe and I will be able to train a little better here so thank you all,” Meylemans said in an Instagram video on Feb. 3.

Currently, Meylemans lives in a single room at the Olympic Village as a close contact of a COVID-19 patient, where she can train but has to take the transportation alone, and eat alone.

Meylemans posted on Instagram an emotional video from an isolation hotel room on Feb. 2, in which she cried for help because the Beijing regime put her into isolation and told her that she had to live there for at least seven days without proper training.

“I’m supposed to stay here for another seven days with two PCRs [COVID-19 tests] a day and no contact with anybody else,” Meylemans said with tears in her eyes in the video. “I ask you all to give me some time to consider my next steps. Because I’m not sure I can handle 14 more days and the Olympic competition now being this isolation.”

Meylemans flew to Beijing on Jan. 29, with her fellow Belgian Olympians. She was quarantined after she entered China because her arrival COVID-19 PCR test was positive. She was told that she would be allowed to enter the Olympic Village after three days of negative test results, and would be treated as close contact of someone who tested positive.

The Belgian athlete tested negative in the following days at the quarantine center, but the regime refused to release her, and instead transferred her to another isolation hotel for further so-called isolation.

Meylemans mentioned on her social media account that she had tested positive earlier in January. But then had 12 tests in her home country, and all results were negative, hence she was allowed to fly to China for the games.

The IOC responded to Meylemans’ video on Feb. 2.

“When the IOC learned about her personal situation after her arrival at the hotel, it took immediate contact with the NOC of Belgium to ensure that appropriate support is offered to her swiftly,” the IOC stated. “Close contacts [of COVID-19 patients] can train and compete, live in the Olympic Village.”

The IOC said that Meylemans being isolated in the second hotel was a “temporary” solution because “there was no such room directly available” at the Olympic Village.

The women’s skeleton event will take place on Feb. 11 at the Yanqing National Sliding Centre. And the official training heats at the centre will begin on Feb. 7.