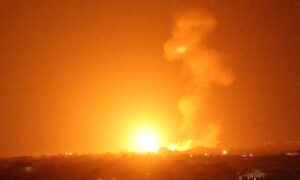 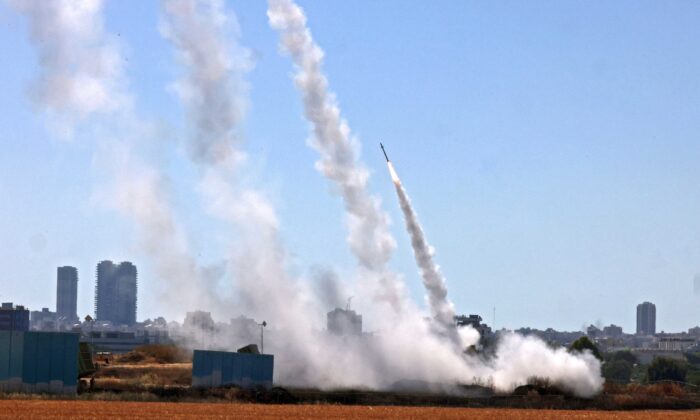 Israel's Iron Dome aerial defense system is activated to intercept a rocket launched from the Gaza Strip, controlled by the Palestinian Hamas movement, above the southern Israeli city of Ashdod, on May 12, 2021. (Emmanuel Dunand/AFP via Getty Images)
Congress

The House of Representatives on Sept. 23 overwhelmingly passed a bill to provide $1 billion for Israel’s Iron Dome defensive system after some Democrats tried to abandon the funding.

The bill drew widespread support from both parties and passed 420–9. Eight Democrats voted against the legislation and two voted “present.” One Republican voted no.

Funding for the Iron Dome, which helps Israel defend against rocket attacks from terrorist groups in adjoining countries and territories, has become a contentious issue among a small number of members of Congress, as illustrated on the House floor before the vote.

The provision was initially part of a stopgap government funding bill House Democrats later passed, but party leaders chose later to put it into a separate bill because of opposition to the bill from so-called progressives such as Reps. Rashida Tlaib (D-Mich.) and Alexandria Ocasio-Cortez (D-N.Y.).

House Democrats have a slim majority and couldn’t pass the bill with no Republican support and no votes from the progressive bloc.

Tlaib, a Palestinian American, said on Sept. 23 before the vote on the standalone bill that Congress “cannot be talking only about Israelis’ need for safety at a time when Palestinians are living under a violent apartheid system.”

“We should also be talking about Palestinian need for security from Israeli attacks,” she said.

That triggered a response from Rep. Ted Deutch (D-Fla.), a Jew, who said that Tlaib “besmirched our ally.”

“I cannot allow one of my colleagues to stand on the floor of the House of Representatives and label the Jewish democratic state of Israel an apartheid state. I reject it,” he said.

The broad bipartisan support is likely to continue in the Senate, which includes members of both parties who have backed it in the past.

“The commitment of the United States to Israel’s security is without question, and our support for an independent Jewish state is unequivocal,” he said in a speech to the United Nations General Assembly on Sept. 21.