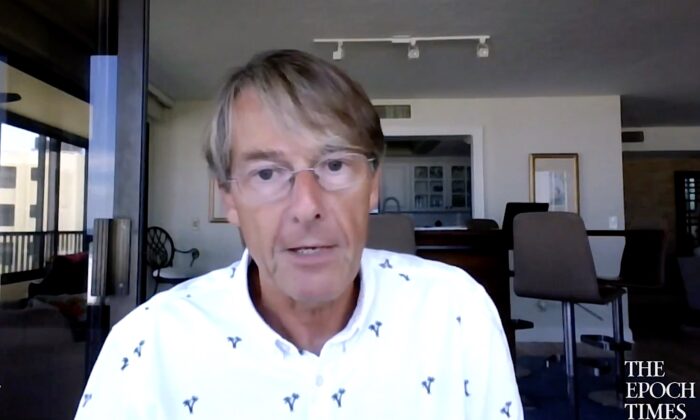 Dr. Michael Yeadon in an interview with EpochTV's "Facts Matter." The interview was aired on June 3, 2022.
Expert View

Lockdowns, mask mandates, and vaccine mandates are all measures not for health, but to get people under control and move toward the ultimate goal of digital ID and digital currency, said Dr. Michael Yeadon, former Pfizer vice president and chief scientific officer for allergy and respiratory research.

“In brief, I’m seeing fraud on a global scale, of which the drug companies are just part,” Yeadon told EpochTV’s “Facts Matter” program in a recent interview.

“There is a huge push globally to persuade people that there is a health threat in order to get them to comply with various economy-destroying measures, and then follow them up with these injections. And I believe this is all ultimately to do with control.”

In April, Yeadon published an article titled “The Covid Lies.” The report refuted a dozen mainstream statements about COVID-19, such as lockdowns slowing the spread and reducing the number of cases and deaths; the only way to end the pandemic is universal vaccination; or the new vaccines are safe and effective.

“I knew it was wrong the moment I heard that they were developing a vaccine. We have never even sought to suppress or end a pandemic through running alongside creating a novel vaccine and then intervening with it,” said Yeadon. “Why? Because—this is really important—the elapsed time taken to get an adequate amount of safety data is always longer than the feasible length of any pandemic in history.”

“And if you take less time, it means you do not have an appropriate amount of safety data.”

According to the Centers for Disease Control and Intervention (CDC), vaccines go through three phases of clinical trials to make sure they are safe and effective. “During the development of COVID-19 vaccines, these phases overlapped to speed up the process so the vaccines could be used as quickly as possible to control the pandemic. No trial phases have been skipped,” said CDC.

“The clinical trials showed no serious safety concerns within eight weeks following vaccination. This is an important milestone, as it is unusual for adverse effects caused by vaccines to appear after this amount of time,” added CDC.

Yeadon said that government shouldn’t coerce people to receive the vaccines with only 2-month-long institutional safety data. “What’s the safety profile six months after you’ve taken it? No one can tell you.”

“I’ve been in drug discovery, drug development for 34 years now. Safety is the most important thing, even more important than effectiveness. Why? Because you’re going to give it to lots of people. So if you’re not really, really sure about the safety, you can easily hurt more people than you could possibly save. That would be doubly so when using a new type of technology,” said Yeadon.

Yeadon had worked for Pfizer for 17 years. He left Pfizer in 2011 to co-found biotech company Ziarco, which Novartis acquired in 2017.

“They said, ‘No. We didn’t cut any corners. We did things in parallel,'” said Yeadon. “No, they didn’t do lots of studies, and they’re missing from the regulatory submission. What that means, I’m afraid, is that the regulators are guilty of fraud.”

“[That] they were not required by the regulator to measure the appearance and disappearance in the blood of these gene-based materials is stunning. Why does that matter so much? It means I’ve no idea whether the amounts going around your body or my body after injection is a tiny amount, medium amount, or a lot. No idea. And they did not measure how long the gene-based material worked to produce the spike protein. Did it last an hour? A week? Forever? They didn’t study it. So we don’t know.”

The CDC referred The Epoch Times to the U.S. Food and Drug Administration (FDA), “the regulatory authority for vaccine trials and safety studies.” The FDA didn’t respond to a request for comment.

Federal health agencies have drawn widespread criticism over their flip-flop on certain COVID-19 measures and their reluctance to release full information about the vaccines. The FDA asked for 55 years to release Pfizer’s COVID-19 vaccine data. The New York Times reported in February that the CDC had been withholding critical COVID-19 data on boosters, hospitalizations, and other analyses.

It’s a false statement that the COVID-19 vaccines are “safe and effective,” said cardiologist and epidemiologist Dr. Peter McCullough.

“None of the vaccines have had clinical trials done versus placebo with that composite endpoint,” McCullough told The Epoch Times in a recent interview. “What’s happened over time is a false narrative that’s developed from observational data.”

The next thing that worried Yeadon was that the four leading COVID-19 vaccine manufacturers—Pfizer, Moderna, Johnson & Johnson, and AstraZeneca—all chose spike proteins to trigger the immune response. He explained why that violates vaccine designing principles.

Firstly, vaccine developers should choose a part of an organism that is not intrinsically harmful.

“We knew before they chose it that the sticking out spike bit on the outside of these viruses is of a family of superficial proteins that are known to be biologically active, to have neurological effects, to have thromboembolic or blood clot effects, and more,” said Yeadon. “So I knew that as soon as I did a little bit of basic research … there was going to be significant safety problems.”

Secondly, vaccine developers should choose “a part of the organism that is genetically most stable.”

“Well, they pick the bit that apparently mutates most quickly. So I knew that meant that as soon as the standard genetic drift occurred, the vaccines will stop working.”

He said vaccine developers should pick a part of an organism most different from human beings, “so that when you elicit an immune response to that, it won’t overlap and hit you.

“But unfortunately, the spike protein, although not very similar, is least dissimilar from human proteins. There are dozens of human proteins that are slightly similar. And I think that makes autoimmune responses very likely.”

Autoimmune disease happens when the body’s natural defense system can’t differentiate between its own and foreign cells, causing the body to mistakenly attack normal cells. COVID-19 vaccine-induced autoimmunity has been reported.

The CDC said that messenger RNA (mRNA) and viral vector COVID-19 vaccines produce spike proteins in the body to trigger the immune response. But the CDC maintains that COVID-19 vaccines are safe and effective.

Pfizer and Moderna COVID-19 vaccines use mRNA technology. In contrast, Johnson & Johnson and AstraZeneca use either a human or chimpanzee adenovirus as the viral vector and encode for the SARS-CoV-2 spike protein.

Knowing his former broad colleagues are not stupid, Yeadon had a hard time figuring out why they picked “the worst thing you could.”

“Collusion and malfeasance” are evident that the four leading vaccine manufacturers all chose to encode the same spike protein in their gene-based vaccines, said Yeadon. Many peers and retired people in his industry told Yeadon they won’t pick this suboptimal choice, and the designers may “loop together.”

The Epoch Times has contacted the above four vaccine manufacturers for comment.

Yeadon spoke up early, but his life changed within a week.

On Dec. 1, 2020, before the European Commission issued its first emergency use authorization for a COVID vaccine, Yeadon and Dr. Wolfgang Wodarg co-signed a petition to the European Medicine Agency to suspend all COVID-19 vaccines studies, citing safety concerns. Wodarg is a former health committee chair of the Parliamentary Assembly of the Council of Europe.

“Within a week, mild-mannered Mike Yeadon who’s never said a thing in public about anything in my whole life apart from in my professional sphere, was suddenly tarred and feathered as an anti-vaxxer,” said Yeadon.

“Why am I doing this? It’s not for money. It’s not for fame. It’s because what I’m telling you is true. That’s the only reason. And I’m doing it for my children and grandchildren,” said Yeadon. He added that he not only had lost a “fat six-figure sum” but also had been abused, smeared, censored, and eliminated from his prior social circle.

‘This is All Ultimately to Do With Control’

Yeadon said that pushing for universal vaccination and many other measures to confront the pandemic are “not to do with public health, but control.”

“The only people you might want to protect would be the very elderly people and those who are already chronically unwell,” said Yeadon. “Why would you want to vaccinate the other 90 percent? You’re wasting money. You’re exposing the population to unnecessary risk. And we’ve never done it before.”

There are “three bits of evidence that I don’t think anyone can rebut,” Yeadon said, referring to three groups of people who shouldn’t be pushed to get vaccinated: those who have recovered from the CCP (Chinese Communist Party) virus, pregnant women, and healthy young children.

Yeadon explained that people who recovered from COVID-19 have better immunity because their bodies dealt with all the virus’s components, not only the spike protein. Pregnant women shouldn’t take the vaccines because the developing fetus is very vulnerable and no long-term reproductive toxicology testing has been done. And young children are at very low risk from the virus.

CDC recommends all eligible people get vaccinated and receive booster shots when the time is due, including those previously infected, pregnant women, and children aged five and above.

On June 9, the Biden administration announced an operational plan for COVID-⁠19 vaccinations for children under five years old, saying FDA and CDC would consider whether to authorize and recommend the first COVID-19 vaccines for this age group the following week.

If the FDA and CDC do authorize and recommend COVID-19 vaccines for this age group, the first vaccinations might start as early as the week of June 20.

On June 15, an FDA advisory panel voted to recommend giving emergency authorization to the Moderna and Pfizer COVID-19 vaccines for children as young as 6 months of age.

“I think the end game is mandatory digital ID—actual reward for being vaccinated, you get a vaccination pass,” said Yeadon. “And then the other half would be mandatory cashless, digital money, central bank digital currencies. And lo and behold, those two things seem to be happening everywhere, and they’re coalescing.”

In June 2021, the European Commission proposed giving every citizen a set of digital identity credentials. Every member state must offer citizens a digital ID wallet that can be used throughout the EU by September 2023.

Yeadon warned that whoever owns the database would have complete control over your life forever because you can’t undo it.

“I plead to people, even if you buy what the government’s been telling you, please be aware and resist, object to the digital control grid,” said Yeadon. “Because I don’t see any way of undoing it. Once it’s done … it will not be possible to remove it.”