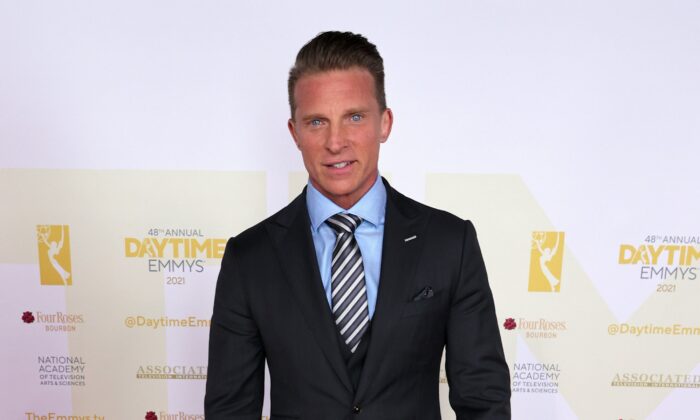 Actor Steve Burton, star of ABC’s “General Hospital,” claims he was fired from the show for failing to get the COVID-19 vaccine after applying for medical and religious exemptions.

In a video posted to Instagram on Tuesday, Burton, who first joined the soap series in 1992, said he was aware that there have been multiple reports regarding his refusal to comply with the vaccine mandate and that he wanted his fans to “hear it from me personally.”

“Unfortunately, ‘General Hospital’ has let me go because of the vaccine mandate. I did apply for my medical and religious exemptions, and both of those were denied, which, you know, hurts. But this is also about personal freedom to me.”

“I don’t think people should lose their livelihood over this, but with that being said, you know me—I’ll always be grateful for my time at ‘General Hospital.’ I love it there. I grew up there,” Burton continued. “I grew up with some of you, so I’ll always be grateful, and I believe that when one door closes, multiple doors open. That’s always been my perspective,” Burton continued.

Burton said he is unsure when his last episode will air on TV, saying he hopes to be back if they ever drop the mandate.

“So, I am excited to see what the future brings, and maybe one day if these mandates are lifted, I can return and finish my career as Jason Morgan, and that would be an honor—and if not, I’m going to take this amazing experience, move forward, and be forever grateful,” he added.

Burton, who has starred in the show for nearly 30 years as the character Jason Morgan, filmed his last episode on Oct. 27. according to NBC, which confirmed the news.

As of Tuesday, the actor, 51, was still listed on the “General Hospital” website.

The Epoch Times has contacted an ABC spokesperson for comment.

Burton is the second actor to depart from the show following the vaccine mandate, after longtime star Ingo Rademacher who plays Jasper “Jax” Jacks, quit for refusing to get vaccinated, and his character was also written out of the show, according to Deadline.

“General Hospital” is filmed in Hollywood, California, and producers have instituted a vaccine mandate for actors and staff working on “Zone A,” which comprises of those present on set when the actors aren’t wearing masks and the actors themselves. The mandate went into effect on Nov. 1, Variety reported.

President Joe Biden’s administration has ordered companies with 100 workers or more to mandate COVID-19 vaccines in an effort to combat the virus.

The mandate, issued by the Labor Department’s Occupational Safety and Health Administration, would require that businesses with 100 employees or more ensure that those workers either be vaccinated against COVID-19 by Jan. 4, 2022, or be tested weekly and wear a mask.

At least 27 U.S. states, as well as private employers, religious organizations, and other groups, have sued the administration, claiming that it’s exceeding its authority in issuing the mandate.