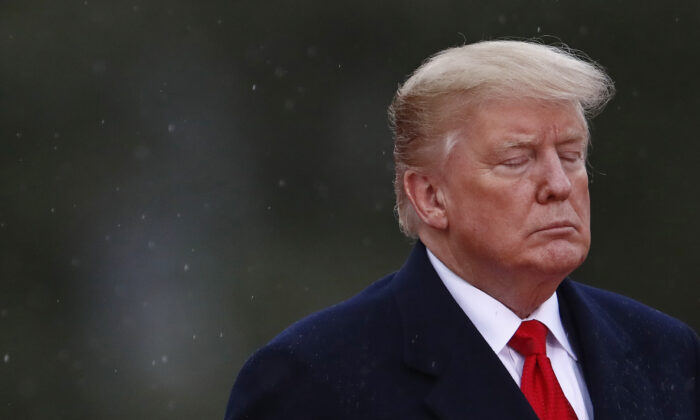 President Donald Trump closes his eyes as he visits the American Cemetery of Suresnes, outside Paris, as part of Veterans Day and the commemorations marking the 100th anniversary of the Nov. 11, 1918, armistice, ending World War I, on Nov. 11, 2018. (Christian Hartmann/AFP via Getty Images)
Trump Administration

Four people forcefully rebutted a story that relied entirely on anonymous sources to claim that President Donald Trump decided not to visit a military cemetery in France in 2018 because he feared his hair would become disheveled.

The story, from The Atlantic, also claimed that Trump in conversations described not believing it was important to honor Americans killed in war.

Sarah Huckabee Sanders, the former White House press secretary, said in a statement that the story “is total BS,” or nonsense.

“I was actually there and one of the people part of the discussion—this never happened. I have sat in the room when our President called family members after their sons were killed in action and it was heart-wrenching,” she wrote.

“These were some of the moments I witnessed the President show his heart and demonstrate how much he respects the selfless and courageous men and women of our military. I am disgusted by this false attack.”

“I was there in Paris and the President never said those things,” Gidley wrote in a statement, describing the anonymous sources as people who “do not have the courage or decency to put their names to these false accusations because they know how completely ludicrous they are.”

“A disgraceful attempt to smear POTUS, 60 days before the Presidential Election! Disgusting!!” he wrote in a tweet.

Stephen Miller, senior advisor to Trump, who was part of the trip, told the Washington Examiner that the story wasn’t true.

“The president deeply wanted to attend the memorial event in question and was deeply displeased by the bad weather call. The next day, he spoke at Suresnes American Cemetery in the pouring rain and refused an umbrella,” he said. “No one has a bigger, more loving, or more loyal heart for American veterans and fallen heroes than our president.”

Trump told reporters in Maryland late Thursday that the story was “fake news.”

Trump said he was ready to go to the ceremony by motorcade because of the inclement weather but the Secret Service blocked the trip, citing operational difficulties.

“So I went and I called home, I spoke to my wife, I said, ‘I hate this, I came here to go to that ceremony.’ And for the one that was the following day, which I did go to. I said, ‘I feel terrible,’ and that was the end of it. Now all of a sudden somebody makes up this horrible story that I didn’t want to go, and then they make up an even worse story, an even worse story, calling certain names to our fallen heroes. It’s a disgrace that a magazine is able to write it.”

At the time the visit was scuttled to the Aisne-Marne American Cemetery, Trump on social media blamed bad weather.

“By the way, when the helicopter couldn’t fly to the first cemetery in France because of almost zero visibility, I suggested driving. Secret Service said NO, too far from airport & big Paris shutdown. Speech next day at American Cemetery in pouring rain! Little reported-Fake News!” he wrote.

Former national security adviser John Bolton wrote in his recently published book that a motorcade could take up to two hours each way “along roads that were not exactly freeways, posing an unacceptable risk.”

“The press turned canceling the cemetery visit into a story that Trump was afraid of the rain and took glee in pointing out that other world leaders traveled around during the day,” Bolton wrote. “Of course, none of them were the President of the United States, but the press didn’t understand that rules for U.S. Presidents are different from the rules for 190 other leaders who don’t command the world’s greatest military forces.”

The White House said Trump’s scheduled trip was canceled “due to scheduling and logistical difficulties caused by the weather.”

The Atlantic story did not note the documents. Instead, author Jeffrey Goldberg claimed that Trump was lying when he blamed the weather for not being able to go to the cemetery.

The media outlet didn’t respond to a request for comment when presented with the documents and the on-the-record claims rebutting its story.

Goldberg said during an appearance on CNN on Friday that his sources didn’t want to go on the record because “they don’t want to inundated with angry tweets and all the rest.”

Employees at the magazine have a history of open animus against the president.

Conor Friedersdorf, a writer, defended the new story by alleging that “Trump has verifiably abysmal character.”

Goldberg, the editor-in-chief, wrote in 2018 that “Trump possesses no ability to explain anything resembling a foreign-policy philosophy.”