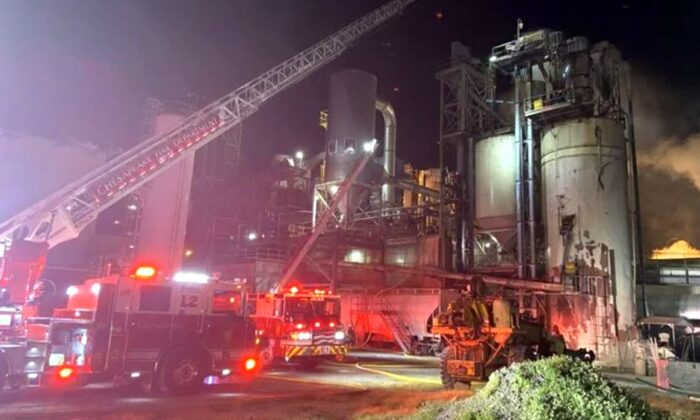 Firefighters respond to an industrial fire that threatened a Perdue Farms facility in Virginia on April 30, 2022. (Chesapeake, Virginia Fire Department)
Crime and Incidents

First responders responded to an industrial fire that threatened a Perdue Farms facility in Virginia over the past weekend, according to a local fire department.

“Chesapeake firefighters battled an industrial fire this evening at Perdue Farms in the South Norfolk area. Plant operators reported a fire in [a] large soybean processing tank,” said the Chesapeake Fire Department in a social media post on Saturday. “Water was applied and the fire brought under control in approximately one hour.”

It added that there is “much work” that remains to be done in dumping materials from the tank. Officials told WTKR-TV that the damage caused by the fire will have little impact on the Perdue plant’s operations.

The fire comes in the midst of heightened awareness about fires and explosions reported at food processing plants across the United States, which were notably highlighted in a Tucker Carlson segment last month.

On April 14, a fire destroyed a food processing plant in the agricultural hub of Salinas, California, officials confirmed. City officials said at the time that an ammonia-triggered explosion sparked the fire at the Taylor Farms Processing Facility.

The most recent fire occurred on April 21 in Georgia, when a plane crashed into a General Mills plant just east of Atlanta, killing two people in the crash, officials told local media outlets. Officials said the plane took off from a nearby airport and appeared to suffer a mechanical failure before crashing into an isolated area of the plant where tractors are located.

Days before that, a fire destroyed parts of the Azure Standard Headquarters in Oregon, local media outlets reported.

“While the HQ facility is a total loss, and a few product lines will be affected for the short term, other Azure Standard facilities are operating as close to normal as possible,” Azure Standard CEO David Stelzer said in a statement after the fire.

The National Fire Protection Association has said in a report that U.S. fire departments respond to an average of 1,210 fires on warehouse properties each year. Fires that were intentionally set and fires caused by electrical and lighting equipment account for about 18 percent of the total warehouse fires, the group stated.

So far, at least 16 food processing plants in the United States have been damaged or destroyed by fires since November 2021.

Matt McKinney, a spokesman for the Food Industry Association, said told The Epoch Times that the U.S. food supply is secure.

“FMI wants to assure the public that they can have full confidence in the security of the nation’s food supply,” McKinney said. “The food industry implements rigorous measures to safeguard food production and ensure Americans can secure the goods they need to keep their families healthy and fed. We remain confident that food suppliers, wholesalers and retailers will continue meeting the needs of the American public.”