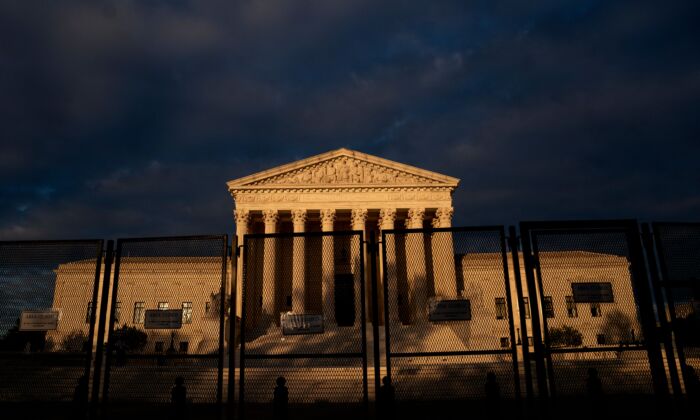 The U.S. Supreme Court is seen behind fences in Washington, D.C., on May 11, 2022. (Stefani Reynolds/AFP via Getty Images)
Viewpoints

In a previous Epoch Times essay, I surmised that the purpose of leaking the Supreme Court’s draft opinion overruling Roe v. Wade (pdf) was to expose one or more justices to political pressure. Abortion proponents are now applying that pressure—in the media, from academia, in Congress, and in the streets.

The establishment media have been giving soapboxes to law professors who claim overruling Roe (pdf) would endanger a string of other SCOTUS precedents. But their alarms demonstrate why you should take most law professors’ pronouncements on controversial issues with not a grain, but a five-pound bag of salt.

For example, on May 12, CBS News ceded Jessica Levinson, a law professor at Loyola Law School in Los Angeles, nearly seven minutes of national airtime so she could warn that overruling Roe would endanger other precedents. I’ve reproduced several of her statements below, with corrections for each.

I should clarify that I have nothing against Levinson. Nor am I saying that she is uniquely uninformed. On the contrary, as I explain at the end of this essay, her mistakes are all too typical of the poor level of scholarship in American law schools.

Let’s start with Levinson’s statement to CBS that the Constitution “leaves a lot of room for interpretation. … We have words, like in the 14th Amendment, we’re protecting our ‘liberty.’ That’s the due process clause. But what does ‘liberty’ mean? That’s part of what we’ve been interpreting for decades now.”

This is a sample of the common claim that many of the Constitution’s words and phrases are vague—or, in academic jargon, “indeterminate”—thereby inviting the courts to interpret them any way they wish.

Actually, however, historical and legal sources tell us that the Constitution is a reasonably precise document. Many phrases that academics label “indeterminate” were formal 18th-century legal terms or had historically determined meanings.

The Fifth and 14th Amendment due process clauses are examples. They prevent the federal and state governments from depriving “any person of life, liberty, or property, without due process of law.” When this language was introduced into the Constitution, its meaning had been understood for hundreds of years. (It dates from an English statute passed in 1354.)

The due process clauses signify this: If government seeks to execute (“deprive … life”), incarcerate (“deprive … liberty”), or take the property of a person—either civilly or criminally—it must follow “process” (procedures) previously established by law. The government may not discriminate against a defendant by making up new procedures as it goes along.

Unfortunately, the Supreme Court has been misinterpreting the due process clauses for over a century. Because most law professors read Supreme Court cases instead of constitutional history, they often repeat the court’s mistakes.

One of the most egregious of the court’s mistakes has been to use the due process clause to strike down laws, not because of faulty process, but because the court objects to the laws’ substance. This odd practice has an odd name: “substantive due process.”

Levinson relied on substantive due process when she stated, “And first what the court found is that under that word ‘liberty,’ it protects the right to privacy.”

If she intended to say that privacy was the first area in which the court followed “substantive due process,” she was wrong. Substantive due process dates from the notorious 1857 case, Dred Scott v. Sandford, in which Chief Justice Roger Taney suggested (although he did not rule) that laws banning slavery in U.S. territories violated the Fifth Amendment due process clause (pdf, p. 450).

The first square substantive due process holding protected not privacy but economic liberty (pdf). It was justly criticized, and later overruled, largely because it improperly inserted conservative economic views into the Constitution. More recently, however, the court has used “substantive due process” to insert liberal political views into the Constitution. Roe v. Wade is case in point.

“We decided?” We decided none of those things.

Levinson’s use of “we” to describe anti-democratic court decisions is reminiscent of the political left’s use of the phrase “our democracy” to mean their ruling oligarchy.

The ‘Whole Line of Cases’ Claim

The principal precedents Levinson refers to consist of these four cases:

In my view, Loving was decided correctly and the other three incorrectly. But irrespective of what I think about these rulings, the fact is that reversing Roe v. Wade would endanger none of them.

First, as to Griswold: Justice Samuel Alito’s draft opinion makes it clear that overruling Roe would not overrule Griswold. This is because Griswold fits within the court’s rule that “substantive due process” protects only liberties “deeply rooted in this Nation’s history and tradition” and “implicit in the concept of ordered liberty.” These “liberties” include marriage and its associated activities.

But Means got his history wrong. In fact, pre-viability abortion was a crime at common law and in most states when the 14th Amendment was adopted. So abortion, unlike marriage, is not a right “deeply rooted in this Nation’s history and tradition.”

The next case, Eisenstadt v. Baird, was decided under the 14th Amendment’s equal protection clause: “Nor shall any State … deny to any person within its jurisdiction the equal protection of the laws.” So, contrary to what Levinson suggests, the substantive due process “unenumerated rights” doctrine behind Roe is simply irrelevant to Eisenstadt.

Loving v. Virginia, protecting interracial marriage, also was decided principally on the equal protection clause. The due process clause was mentioned only secondarily.

Obergefell v. Hodges, the case on same-sex marriage, was based on both clauses. Even if the Supreme Court returned to a narrower meaning of the due process clause, Obergefell would survive under the equal protection clause.

In sum: Overruling Roe would have no effect on any of these other cases.

She responded, “Perhaps the [privileges or immunities clause] would have been better situated to protect these rights. But the court basically read that clause out of existence.”

This answer is also wrong. The words “privileges” and “immunities” appear in the original Constitution, where they refer to entitlements created by the government rather than to natural rights (pdf). Although some people claim the 14th Amendment usage is broader, that claim is unsupported by any statements in the state legislatures that ratified the amendment.

When in doubt, courts assume words in an amendment mean the same as in the original Constitution. That is essentially what the Supreme Court did in the 1872 decision Levinson criticizes. The court didn’t “read the privileges or immunities clause out of existence.” It merely restricted the clause to its original meaning.

Why Do They Get So Much Wrong?

How could someone who teaches constitutional law get so much wrong? The answer has less to do with Levinson than with law schools generally.

In most fields, a professor—particularly one teaching at the graduate level—must be a specialist with a Ph.D. in his or her subject. He or she is expected not only to teach but also to publish research pushing forward the frontiers of human knowledge.

Law professors, by contrast, usually have no education beyond law school. Most have no special training in history, legal history, historical method, classics, contemporaneous literature, or any other subject relevant to the U.S. Constitution. Very few even have substantial law practice experience, so they have no resonance with the majority of the leading Founders who were practicing lawyers. Thus, it’s no surprise that instead of pushing forward the frontiers of human knowledge, they often push forward their untutored political opinions.

Alan Watson, a Scot who taught for many years at U.S. law schools, was arguably the greatest comparative law scholar of his generation. In 2006, he wrote a book titled, “The Shame of American Legal Education.” Watson leaned to the left politically, but was honest in his reports on the dreadful state of American legal “scholarship.” His account explains why you should take most law professors’ pronouncements on controversial issues with a five-pound bag of salt.

No, make that a ten-pound bag.

Robert G. Natelson, a former constitutional law professor, served for 25 years before fleeing academia in 2010. He is a senior fellow in constitutional jurisprudence at the Independence Institute in Denver and author of “The Original Constitution: What It Actually Said and Meant” (3rd ed., 2015) and numerous other works of scholarship.