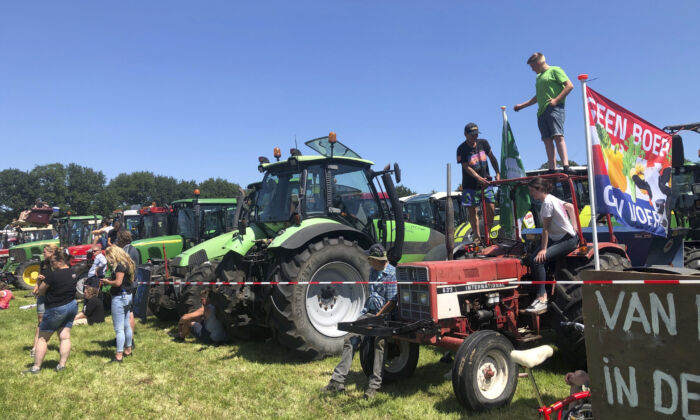 “The real point here is the Great Reset, mass migration, [and] transnational governance. And that’s why the people have to become atomized—they have to lose their connection with the land. And that’s why they’re hitting the farmers,” he said.

Baudet, a member of the Dutch House of Representatives and leader of the political party Forum for Democracy, made the remark during a July 8 interview with Roman Balmakov, host of EpochTV’s “Facts Matter.”

The interview can be viewed on EpochTV as part of a new video, “Farmer Rebels.” More footage from the Netherlands will be released over the next few days.

In a July 5 episode of EpochTV’s “Crossroads with Joshua Philipp,” he also spoke about the Dutch farmer protests.

“This is not just a Netherlands thing—this is an all of Europe thing as well,” Philipp said, noting that protests have spread across the continent, partly in connection with similar policies from the European Commission.

Baudet also spoke to The Epoch Times on July 5.

In that interview, Baudet said the government’s policy reflects pressure from the European Union (EU) related to the country’s involvement in the EU’s Natura 2000 network.

“How is it possible that in an age where everybody’s talking about the possibility of food shortages, of insecure supply chains, the Dutch government is pursuing this policy which will lead to even more dependence on international supply chains and, thus, uncertainty for the Dutch people?” Baudet said on July 8.

“The answer is the people governing this country are following the script written by the EU, to realize what they call a Great Reset. They want to make us more dependent on international supply chains. They want to weaken Dutch sovereignty and autonomy.”

Baudet and other Dutch politicians, including Dutch House of Representatives member Geert Wilders, have asserted that the government is trying to acquire farmland cheaply in order to build more housing for migrants.

In his July 8 interview, Baudet acknowledged that the state didn’t make migrant housing an explicit aim in its approach to the country’s farmers.

However, he said, the current government, led by Prime Minister Mark Rutte, has made the continuation of mass migration an explicit goal.

A webpage for Rutte’s party, the People’s Party for Freedom and Democracy, suggests that it’s open to asylum-seekers until would-be asylees have used all legal means to appeal their case.

Dutch government statistics show that net migration (people entering minus people leaving) to the country has trended up in recent years, rebounding in 2021 after dipping during the COVID-19 year of 2020.

“If you bring in 100,000 people a year net, then your nitrogen oxide emissions are going to increase anyway,” Baudet said, questioning the government’s priorities in seeking to eradicate farmland while enabling mass migration to help fuel population growth.

“Nobody’s making these larger analyses of what’s going to happen to the economy in the longer run. How are our policies internally consistent with one another?”

Dutch government ministries contacted by The Epoch Times didn’t immediately respond or declined to comment about claims that the state seeks to house migrants on what is now farmland.

Baudet believes there’s a deeper, even spiritual element to the battle over the Netherlands’ farms.

“Farmers, and in general people living on the land and off the land and with the land, have a strong connection to the history they’re proud of. They’re often family companies that have been in that family for several generations. And so these are not postmodern, post-historical, post-national people,” he said.

“They’re proud family people who have their own business, who live off their own land, [and] who have a connection to the history and to the nature of this country. And so, they form a direct threat to the globalists’ post-territorial, post-identitarian agenda.”