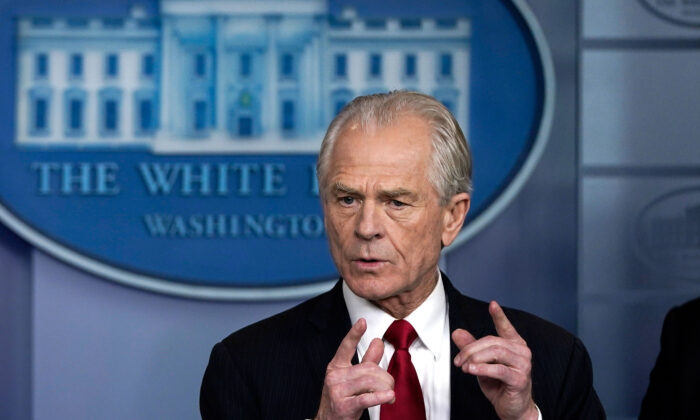 White House Trade and Manufacturing Policy Director Peter Navarro speaks during a briefing on the COVID-19 pandemic in the press briefing room of the White House in Washington on March 27, 2020. (Drew Angerer/Getty Images)
By Katabella Roberts

The Department of Justice (DOJ) on Monday asked a judge to order former White House adviser Peter Navarro to return private email communications that he sent while working for the Trump administration, claiming that he has “refused” to do so in violation of a record-keeping law.

In a motion filed in the U.S. District Court in Washington, D.C., the DOJ noted that while working as a senior White House advisor from January 2017 until January 2021, Navarro was subject to the terms of the Presidential Records Act (PRA).

Under that act, Presidential records are the property of the federal government and once that president leaves office, “[t]he United States shall reserve and retain complete ownership, possession, and control of Presidential records; and such records shall be administered in accordance with the provisions of this chapter.”

The PRA describes Presidential records as “documentary materials, or any reasonably segregable portion thereof, created or received by the President, the President’s immediate staff, or a unit or individual of the Executive Office of the President whose function is to advise or assist the President, in the course of conducting activities which relate to or have an effect upon the carrying out of the constitutional, statutory, or other official or ceremonial duties of the President.”

The DOJ alleges that Navarro used “at least one non-official email account” while working in the White House to send and receive messages but that he failed to copy those emails or messages to his government email account within 20 days as required by the PRA.

The emails addressed topics such as the need for ventilators, the creation and deployment of National-Guard-based rapid response teams, and the use of hydroxychloroquine to treat COVID-19.

Witch hunt Subcommittee on CCP Virus says me and Doc Hatfill “pressured” the FDA. We say the FDA murdered over half a million Americans. Read this and YOU decide. https://t.co/gCFclYppIG

“There is no genuine dispute of fact that Dr. Navarro used at least one unofficial email account to conduct official business, that those records are the property of the United States, and that Dr. Navarro has refused to return the records to the United States,” the department wrote. “Indeed, his counsel has expressly admitted as much,” they said.

“Because Dr. Navarro remains in possession of property that belongs to the United States, this Court should issue a writ of replevin requiring Dr. Navarro to return what he wrongfully continues to possess,” the lawyers added.

The lawsuit states that the National Archive Records Administration (NARA) became aware that it was not in possession of the emails following an investigation by the House Select Subcommittee on the Coronavirus Crisis.

“Never Refused to Provide Records to the Government’

NARA then contacted Navarro in December 2021 asking that he hand over the records, according to the motion. The DOJ followed up with its own letter to Navarro in June 2022. NARA also provided Navarro’s lawyers with a list of search terms.

Navarro’s attorneys complied and told the DOJ that as many as 1,700 emails fit the description NARA provided; later estimating that between 200 and 250 of the 1,700 documents were PRA records.

The DOJ initially sued Navarro for allegedly violating the record-keeping law back in August. At the time, Navarro’s lawyers argued that he “has never refused to provide records to the government.”

“As detailed in our recent letter to the Archives, Mr. Navarro instructed his lawyers to preserve all such records, and he expects the government to follow standard processes in good faith to allow him to produce records. Instead, the government chose to file its lawsuit today,” his attorneys told The Hill in a statement.

The Epoch Times has contacted representatives for Navarro for comment.

Meanwhile, there is an ongoing investigation into former President Donald Trump’s own handing of presidential records, which saw the FBI raid his Mar-a-Lago home last month while he was in New York City.