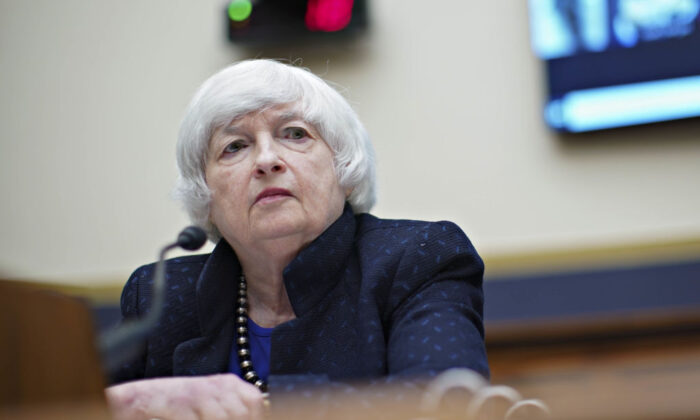 Treasury Secretary Janet Yellen on Oct. 18 said the signing of the debt limit increase into law last week will ensure the funding of the federal government through Dec. 3.

In a letter (pdf) addressed to House Speaker Nancy Pelosi, Yellen said the debt-limit raise “provides only a temporary reprieve.”

Yellen also urged Congress to “increase or suspend the debt limit in a way that provides longer-term certainty that the government will satisfy all its obligations.”

The Senate passed the bill on Oct. 8 on a party-line vote of 50–48, coming after 11 Republicans, including Senate Minority Leader Mitch McConnell (R-Ky.), joined Democrats to end a filibuster that required 60 votes.

“I am writing to make it clear that in light of Senator Schumer’s hysterics and my grave concerns about the ways that another vast, reckless, partisan spending bill would hurt Americans and help China, I will not be a party to any future effort to mitigate the consequences of Democratic mismanagement,” he told Biden, referring to Senate Majority Leader Chuck Schumer (D-N.Y.).

The House of Representatives voted last Tuesday to extend the federal debt ceiling through early December and Biden signed the bill into law two days after.

Yellen had previously warned that any default on U.S. debt would bring the economy into crisis and trigger a recession.

“We have learned from past debt limit impasses that waiting until the last minute to suspend or increase the debt limit can cause serious harm to business and consumer confidence, raise short-term borrowing costs for taxpayers, and negatively impact the credit rating of the United States,” wrote Yellen in a Sept. 8 letter to Capitol Hill leaders (pdf).

The Bipartisan Policy Center said in its September debt-limit analysis that “Treasury will be unable to meet approximately 40% of all payments due in the several weeks” after running out of cash.