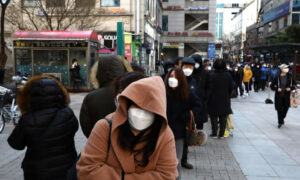 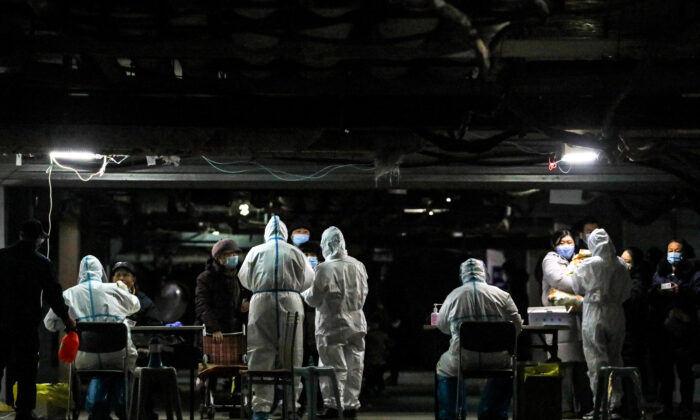 Residents undergo COVID-19 testing in the basement of a residential compound as part of a mass testing program following new cases of the virus emerging in Shijiazhuang, in northern China's Hebei Province on Jan. 12, 2021. (STR/AFP via Getty Images)
Chinese Regime

Chinese authorities continue to underreport COVID-19 cases in the mainland, according to recent government documents obtained by The Epoch Times from a trusted source. Evidence suggests that there may be many reinfection cases that the Chinese regime has concealed as they shift the responsibility to local authorities.

Since the beginning of the year, a few reinfection cases have been reported by local authorities and the media in various places in the mainland.

On May 1, Henan provincial authorities reported one patient who recovered from COVID-19 but tested positive after being discharged from the hospital on April 3, according to Chinese news portal Sina.

A similar case was reported in Shanxi Province on April 27—a COVID patient was reinfected after being hospitalized, according to Chinese media reports.

On April 24, authorities in Wangkui county of Heilongjiang Province reported one reinfection case. But on the same day, The Epoch Times learned from an insider in Suihua city, which has jurisdiction over Wangkui, that the county saw dozens of reinfection cases. Furthermore, the anonymous source said that Huiqi village (in Wangkui) was sealed off, while Wangkui was placed under partial lockdown.

“There are patients who recovered from COVID but tested positive again in Huiqi village of Wangkui county, and the village has been locked down. According to internal sources, there are more than 30 reinfection cases,” the insider revealed.

Wangkui was one of the epicenters of the COVID-19 outbreak in China at the beginning of this year.

In January, Chinese media reported two reinfection cases—one in the capital city Beijing and the other in Shanxi Province.

However, a series of documents issued by municipal governments in Hebei Province suggests that reinfection cases are being underreported.

The publication obtained a classified document titled, “Notice on Strengthening the Nucleic Acid Testing for Recovered and Discharged COVID-19 Patients,” issued by China’s State Council’s Joint Epidemic Prevention and Control Team on Feb. 26. The document is marked “Non Disclosure to the Public.” It revealed that reinfection cases appeared in many parts of the mainland, but it did not give specific numbers. The State Council blamed local authorities for this phenomenon, stating that the “nucleic acid testing did not meet the standards” and “the standards for discharging patients from hospitals were not implemented accurately.”

As a preventive measure, the State Council proposed to do more nucleic acid testing on discharged patients across the country. The document did not mention other measures.

However, the publication obtained other documents from local governments that counter the State Council’s statements in the aforementioned document.

One document called “Report on the Positive Nucleic Acid Test Results of the Recovered and Discharged COVID-19 Patients Jia and Han,” was issued by the Shijiazhuang Municipal Health Commission in Hebei Province on Feb. 19. The cases were not reported by the authorities and the media in the mainland.

The two patients, ages 14 and 33, both reside in Gaocheng district of Shijiazhuang city, which was one of the COVID hotspots in China in the beginning of the year. Jia and Han tested positive for the virus in mid-February after being discharged from the hospital. The report claimed that both patients were admitted to the provincial Hebei Chest Hospital for isolation and treatment. Before they were discharged, their nucleic acid tests were negative, and their chest CT examinations were normal.

Another document issued by the Shijiazhuang City Health Commission on Feb.24, titled, “Experts’ Assessment Report on the Recovered and Discharged Patients Jia and Han Who Tested Positive,” stated that nine medical experts in Hebei Province and Shijiazhuang municipality reviewed their cases and concluded that both patients met the requirements for being discharged from the hospital, as set by the National Health Commission.

The document also stated that the medical staff followed “rigorous” procedures before they discharged Jia and Han, and the decisions were approved by multiple supervisors. Both patients stayed in the hospital for 36 days.

U.S.-based Chinese current affairs commentator Li Linyi spoke with The Epoch Times and shared his views on the discrepancies between the information from local authorities and the report from the State Council. He said the local authorities in Hebei Province claimed that they fully complied with the hospital discharge standards set by the National Health Commission, but in the end, some patients who recovered from COVID were reinfected, which probably means that the standards set by the central authorities are flawed, Li said. The State Council has shifted the responsibility to the local authorities, requiring them to improve the nucleic acid testing of discharged patients. In fact, no one wants to take the responsibility for it, and they are blaming each other, Li said.

Li added that there are still many questions about the CCP virus and modern science doesn’t have all the answers yet.

Gu Qing’er and Hu Yuanzhen contributed to this report.