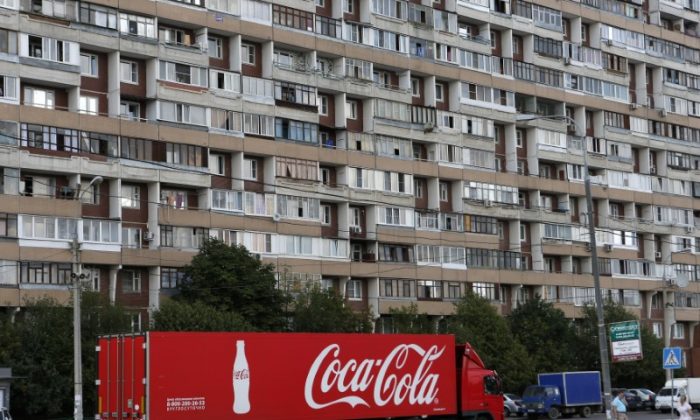 A truck transports bottles from Coca-Cola on the outskirts of Moscow on Aug. 6, 2014. (Reuters/Maxim Shemetov)
US News

Coca-Cola Has Employees Train on How to ‘Be Less White’: Whistleblower

Coca-Cola employees are apparently required to take training on how to be “less white” to combat racism, according to photos posted online by an alleged whistleblower.

“Be less oppressive, be less arrogant, be less certain, be less defensive, be less ignorant, be more humble, listen, believe, break with apathy, break with white solidarity” are listed as means to become “less white,” according to the photos. It doesn’t elaborate on how to accomplish those things.

“In the U.S. and other Western nations, white people are socialized to feel that they are inherently superior because they are white,” one of the slides claims. “Research shows that by age 3 to 4, children understand that it is better to be white.”

The slide appears to conclude: “Try to be less white.”

“If a corporate company sent around a training kit instructing black people how to ‘be less black,’ the world would implode and lawsuits would follow,” she wrote on Twitter. I genuinely hope these employees sue @CocaCola for blatant racism and discrimination.”

Coca-Cola issued a statement on its website about the photos and attempted to distance itself from the material.

“The video and images attributed to a Coca-Cola training program are not part of the company’s learning curriculum,” reads a statement from the company titled “Statement on The Coca-Cola Company Diversity, Equity & Inclusion Training.”

The Atlanta-based firm added: “Our Better Together global training is part of a learning plan to help build an inclusive workplace. It is comprised of a number of short vignettes, each a few minutes long. The training includes access to the LinkedIn Learning platform on a variety of topics, including on diversity, equity, and inclusion. The video in question was accessible on the LinkedIn Learning platform but was not part of the company’s curriculum. We will continue to listen to our employees and refine our learning programs as appropriate.”

Coca-Cola confirmed to Newsweek that the course is part of its training.

🚨🚨🚨 BREAKING: Coca-Cola is forcing employees to complete online training telling them to “try to be less white.”

These images are from an internal whistleblower: pic.twitter.com/gRi4N20esZ

On Feb. 19, Karlyn Borysenko, an activist who supports the banning of critical race theory, posted the images from an internal whistleblower.

Officials at Coca-Cola didn’t immediately respond to a request by The Epoch Times for comment.

The slides appear to draw heavily from critical race theory, a Marxist-inspired ideology that reinterprets history as a struggle between white people and other races, labeling people—typically whites—as the “oppressors” and all other ethnicities as the “oppressed” on account of their skin color. The theory echoes the Marxian division of society based on class and reimagines “class struggle” based on race, gender, and sexual orientation.

The theory has crept into public schools, universities, workplaces, and the federal government in recent years. It has triggered warnings from free speech advocates and conservatives, with former President Donald Trump issuing an order in 2020 that banned training sessions for federal employees based on critical race theory.