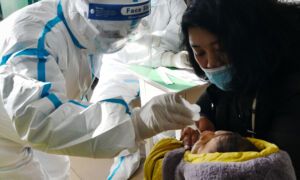 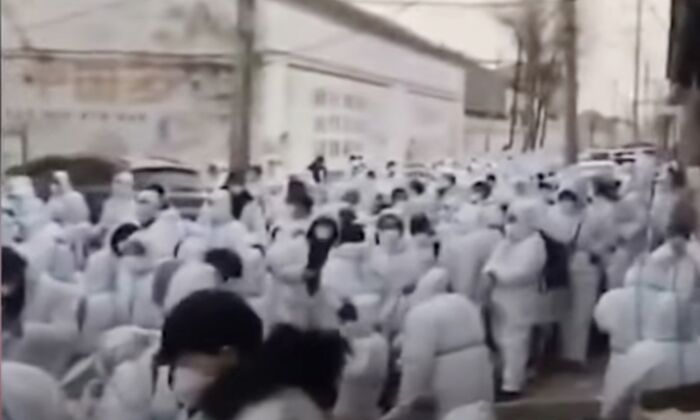 Villagers from Sanlizhuang village in Nangong, northern China's Hebei Province are waiting to take shuttle buses to a quarantine center on Jan. 13, 2021. (Screenshot/Video Provided to The Epoch Times by interviewee)
CCP Virus

Chinese authorities on Jan. 14 announced the first COVID-19-related death in months. As China faces resurgences of the CCP virus throughout the country, the low fatality count has raised eyebrows.

According to the chief doctor of the Hebei Province COVID-19 medical team, Yan Xixin, the 69-year-old patient was diagnosed on Jan. 9 after experiencing a fever. She was taken to the Hebei Chest Hospital for treatment, but her condition deteriorated quickly.

She was placed on an ECMO heart-lung machine. She passed away on Jan. 13 with multiple organ failure, Yan said at a Jan. 14 press conference in Shijiazhuang, the city with the most severe outbreak.

She’s the first COVID-19 fatality that authorities confirmed since May 2020.

The outbreak in northeastern China’s Heilongjiang Province continued to spread. On Jan. 14, the provincial government told all 38 million residents to self-quarantine at home. It didn’t say how long the quarantine period would be, but Chinese authorities typically require at least 21 days of quarantine.

And on Jan. 13, Shanghai ordered all residents to stay in the city and not travel for the upcoming Lunar New Year holiday. People from other regions with outbreaks would not be allowed to enter Shanghai.

New outbreaks were also reported in other parts of the country.

State-run media Xinhua reported that the Shijiazhuang government had selected a 3,000-acre plot of land to build a makeshift quarantine facility.

According to the Xinhua report on Jan. 14, 3,000 container homes would arrive within three days in Shijiazhuang.

Officials said the facility would be used for quarantining people suspected to have contracted COVID-19. But the manufacturers—three companies based in Tangshan city, Hebei—told Xinhua that the containers would be constructed similar to the ones they built for the Huoshenshan makeshift hospital in Wuhan during the epicenter of the pandemic in early 2020.

Wuhan authorities spent 10 days to build the facility to treat the large numbers of COVID-19 patients in severe condition.

Each container will be over 190 square feet—slightly larger than the 177 square-feet rooms in Huoshenshan, according to Xinhua.

Authorities did not announce an expected completion date for the facility in Shijiazhuang.

The local outbreak continued to worsen. On Jan. 14, the central government’s State Council instructed other provinces to provide ambulances to Shijiazhuang for transporting COVID-19 patients, according to a report by state-run newspaper Dahe.

Central China’s Henan Province organized a team of 95 people and 18 vehicles from its capital of Zhengzhou and sent them to Shijiazhuang within several hours, according to Dahe. 80 percent of the staff members had gone to Wuhan in 2020 to assist with transporting patients.

As of  Jan. 14, over 20,000 residents in Shijiazhuang were forced to leave their homes and be quarantined at hotels, school dorms, and other facilities converted into makeshift quarantine centers. All 11 million residents continued to be locked down at home.

Xinhua also reported on Jan. 14 that 55-year-old Li Ruizhi died less than two hours after she suddenly lost consciousness at a community COVID-19 testing site on Jan. 7. The city has required all residents to be tested.

Li was one of the staff who helps maintain order. She died of a heart attack, according to Xinhua. Authorities didn’t explain why they announced her death days later.

In nearby Xingtai city, authorities quarantined all who lived in Sanlizhuang village. They were forced to leave their homes and be transported to hotels and hospitals in downtown Xingtai.

Readers of the Chinese-language Epoch Times inside China shared videos of villagers dressed in protective suits as they waited to be taken away by shuttle bus.

Li Ming (pseudonym) lives in a neighborhood next to Sanlizhuang. He said in a Jan. 14 phone interview that the entire village was sealed off and the villagers were taken to quarantine sites after four of them tested positive for COVID-19 the day prior.

“They were taken away by the government. … We are lucky [that we can stay at home],” Li said.

Temperatures plunged to lower than minus 8 Celsius (18 degrees Fahrenheit) in recent days. Villagers posted on Chinese social media platform Weibo that they had to wait in the shuttle buses for hours in the cold as government staff arranged their quarantine rooms.

Villagers quarantined at school dorms complained that the heating system didn’t work properly and they didn’t have food to eat.

On Jan. 14, Hulunbuir city in the far-north region of Inner Mongolia announced that a local hospital had to close down after authorities discovered that environment samples taken from the facility tested positive for COVID-19.

The city government told residents who had visited the hospital since Dec. 31, 2020, that they must self-isolate at home, and suspended all passenger transportation to or from Bayantuohai town, where the hospital is located.

Authorities didn’t say whether people were infected with the CCP virus in the region, or how the virus samples ended up in the hospital.

Meanwhile, Nanning city in the southern Guangxi region announced a newly diagnosed patient, an employee at a disinfectant supplier company.

The patient experienced symptoms on Jan. 12 but didn’t go to the hospital. The next day, the company told all staff to take a test, and the patient tested positive.