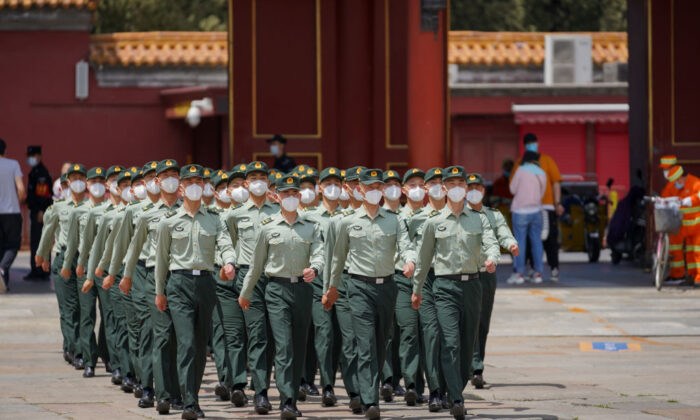 Soldiers of the People's Liberation Army march in front of the entrance of the Forbidden City in Beijing on May 20, 2020. (Andrea Verdelli/Getty Images)
US-China Relations

An alleged Chinese researcher who hid his military background was arrested at the Los Angeles International Airport (LAX) on June 7 before he could board a plane back to China.

Wang Xin, who is actually an officer with China’s military, the People’s Liberation Army (PLA), was charged with visa fraud after his arrest on Sunday, according to a June 11 press release from the Department of Justice.

According to a criminal complaint unsealed on June 8, Wang was issued a multiple entry J1 non-immigration visa on Dec. 17, 2018, but he had intentionally made fraudulent statements on the visa application “in order to increase the likelihood that he would receive” the visa. The U.S. State Department issues J1 non-immigration visas to individuals who qualify for work-and-study-based exchange visitor programs.

Wang stated in his visa application that he was going to “conduct scientific research” at the University of California, San Francisco (UCSF). He falsely claimed that he had served as an associate professor in medicine at the PLA from September 2002 to September 2016, according to prosecutors.

Wang entered the United States through the San Francisco International Airport on March 26, 2019, according to the complaint.

On Sunday, just before boarding a plane that would take him from LAX to Tianjin city in China, Wang was stopped and interviewed by U.S. customs and border protection officers.

The interview revealed Wang’s true intention in the United States. According to the press release, Wang said he was instructed by his supervisor, the director of an unnamed military university lab in China, to “observe the layout of the UCSF lab and bring back information on how to replicate it in China.”

While at UCSF, Wang had emailed research to a lab in China, customs officers learned. Wang also told his supervising professor at UCSF that he had duplicated some of the professor’s work at the Chinese lab.

According to the complaint, he told the customs officers that he was still employed by the PLA and receiving compensation from the PLA during his stay in the United States. More specifically, he said he was a “Level 9” technician in the PLA—a position that the officers equated as the U.S. military rank of major.

While in the United States, Wang said he was also receiving compensation from the China Scholarship Council, an organization run by China’s Ministry of Education, according to the complaint.

Some of the work at the UCSF lab was funded by grants from the U.S. Department of Health and Human Services and the National Institutes of Health (NIH), according to the press release.

He was detained following his court appearance in the Central District of California. He is scheduled to appear in another court session at 10 a.m. local time on June 12 for a detention hearing.

In an email, the Department of Justice said it had no comment regarding the possibility of additional or different charges in the future.

In October 2018, the Australian Strategic Policy Institute (ASPI), an independent think tank partially funded by Australia’s Department of Defense, issued a report detailing Beijing’s scheme to send scientists with ties to the PLA abroad, mostly to the “Five Eyes” alliance countries—Australia, Canada, New Zealand, United Kingdom, and the United States—as well as other countries such as Singapore and Germany.

The report estimated that since 2007, more than 2,500 Chinese military scientists and engineers have traveled abroad, often by masking their military ties.

They would hide their ties to the PLA, such as using names of non-existent research institutions as their cover.

According to the report, the PLA describes such schemes as “picking flowers in foreign lands to make honey in China”: acquiring foreign technology to advance the Chinese military’s capabilities.