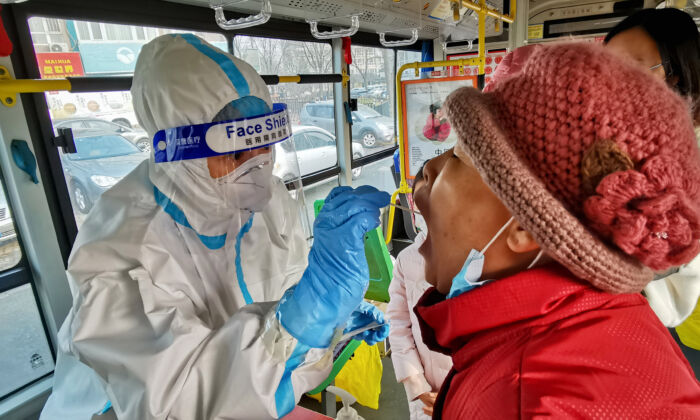 A health worker takes a swab from a resident to test for the COVID-19 in Dalian, China on Dec. 23, 2020. (STR/AFP via Getty Images)
INSIDE CHINA

The cities of Beijing, Dalian, and Shenyang issued more restrictions as new COVID-19 cases were discovered.

Some Dalian residents told the Chinese-language Epoch Times that their experiences reminded them of reports from Wuhan during the height of the epidemic.

The Guanshanyue residential compound in Dalian has been locked down for almost ten days thus far. On the evening of Dec. 28, residents shouted from their apartment windows, pleading authorities to provide them with food and other living necessities.

On Tuesday, China’s National Health Commission announced new infection figures in Beijing, Dalian, and Shenyang, while confirming asymptomatic carriers (counted in a separate category) without mentioning where they were detected.

In Jinpu New district, officials have started to use paper seals to secure people’s doors. If the seal is broken, authorities will assume the family violated regulations and will isolate the family at quarantine centers.

Those found driving without permission will be fined 300 yuan ($46) and lose their drivers’ licenses.

Since Dec. 28, only people driving trucks to deliver goods are allowed on the road. Drivers must remain inside their vehicle the entire trip and cannot open the trailer or the window. People in the district will open the trailer to unload the goods.

Paper seals were placed on the truck windows and doors to ensure drivers follow the rules.

A Dalian resident cried on the phone as he explained his family’s situation. Fearing reprisal from authorities for speaking to media, he chose to identify himself with a pseudonym, Zhang.

Zhang and his siblings live in another district, but their parents live in Jinpu New district, which has been fully locked down. On Dec. 25, one of Zhang’s parents suddenly had a heart attack. Zhang called an ambulance. However, no doctor took care of the parent after the ambulance transported the patient to the hospital.

“My parent had been lying in the hospital’s emergency room for three days. No doctor visited,” Zhang said. “After my parents asked many times, the nurse told them that the patient needs to take two nucleic acid tests before any diagnosis.”

Zhang’s parent took two tests. A nurse informed the family that the 10,000 yuan ($1,531) they paid was used up. In China, a patient is required to pay fees upfront before any treatment or diagnosis.

Other families may face the same predicament. On Dec. 27, the Dalian health commission ordered 18 local hospitals to stop admitting new patients and to cancel most of the planned operations.

Two of the COVID-19 positive patients detected in Beijing were ride-sharing drivers. Authorities soon locked down 10 areas of Shunyi district on Tuesday. They also prohibited university students from leaving campus.

The Beijing government also said it was canceling large-scale gatherings such as temple fairs and sporting events, and controlling the size of offline events such as annual parties.

Wuxi authorities claimed the carrier contracted COVID-19 while he was overseas. However, the man entered China from Egypt on Dec. 12 and had tested negative four times in the past 17 days.

It is unclear what is the true scale of these outbreaks, given Chinese authorities’ past record of concealing infections.

The National Health Commission organized a video conference on Tuesday to arrange epidemic-related tasks for the New Year, noting that preventing COVID-19 spread in rural areas will be critical.

“[Each village] must strengthen grid control in rural areas and strengthen treatment at the designated hospitals,” the commission said. Grid control is part of the Chinese regime’s surveillance system, which divides neighborhoods into small blocks, with an official, known as a “grid manager” tasked to monitor all residents within the block.

The Beijing government has also urged residents to stay home during the holidays.

A New Year’s Day light show was also called off.