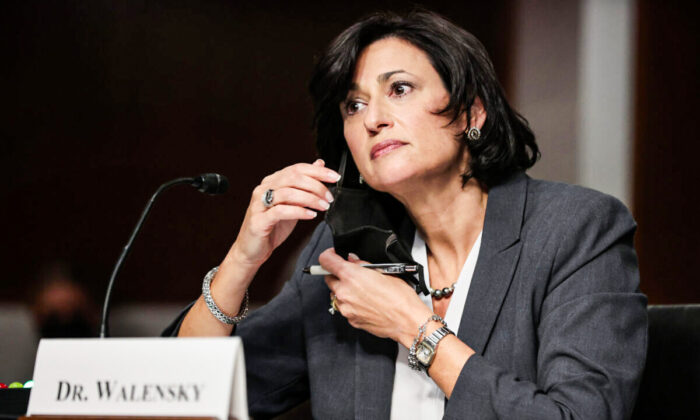 Centers for Disease Control and Prevention Director Rochelle Walensky testifies before the Senate Health, Education, Labor, and Pensions Committee about the ongoing response to the COVID-19 pandemic in the Dirksen Senate Office Building on Capitol Hill in Washington, on Nov. 4, 2021. (Chip Somodevilla/Getty Images)
Executive Branch

The director of the Centers for Disease Control and Prevention on Thursday declined to share with a Senate panel how many of the agency’s workers have gotten a COVID-19 vaccine.

The agency, or the CDC, has been at the forefront of pushing COVID-19 vaccination during the pandemic since the first vaccine received emergency authorization late last year.

“We’re actively encouraging vaccination in all of our employees and doing outreach in order to get our agency vaccinated,” Walensky responded.

Sen. Richard Burr (R-N.C.), the top Republican on the panel, revisited the topic just before the hearing ended.

“Do you really not know the answer to the number of vaccinated individuals at CDC or did you just not want to answer Sen. Cassidy’s question?” Burr wondered.

Walensky declined to answer directly. “We’re still actively working on collecting those data and those data are updated in real-time,” she said.

Burr asked for the numbers to be sent to the committee by Nov. 8.

“We are working toward updating that data. I would have to speak with my staff about where we are and whether those numbers are going to be available on Monday,” Walensky said.

Burr noted that one of President Joe Biden’s executive orders mandates all federal employees, including CDC workers, must produce proof of vaccination by Nov. 8 or face disciplinary action.

“If the collection is still in process, how are you going to start disciplinary actions based upon the executive order?” Burr asked.

“We’re actively updating those data. I just don’t know exactly when they will be fully in, but certainly we will have those data by the appropriate deadline,” Walensky said.

“I will make sure we’re complying with the rules because we want everyone else to as well,” Walensky said.

Cassidy said he was told that north of 75 percent of CDC employees who had worked from the agency’s headquarters in Atlanta are still working remotely, which Walensky declined to confirm but also did not deny. She said the agency was following federal guidelines.

The CDC’s director and Dr. Anthony Fauci, another top health official in the administration, were also pressed during the hearing about the administration’s push to get virtually every American vaccinated against the CCP (Chinese Communist Party) virus, which causes COVID-19—even Americans who have contracted the illness and recovered, giving them some level of immunity.

Burr noted that a real-world Israeli study found natural immunity, or that protection, was higher than the protection conferred by Pfizer’s vaccine, and other research has indicated that natural immunity results in memory B cells that keep protecting for up to one year after recovery. He also referred to the CDC’s recent brief that says natural immunity lasts for at least six months.

Walensky downplayed the data, claiming that the studies showing vaccines provide protection are more robust than those supporting natural immunity. “The data on infection-induced immunity, some of which you quoted, are murkier. They rely on retrospective studies, observational studies, and studies where we can’t do a prospective study,” she said.

Walensky touted a recently published CDC study that was said to have determined that people who remained unvaccinated and had natural immunity were about five times more likely to contract COVID-19. That study was also retrospective and criticized by some experts in comparison to the Israeli research.

Cassidy, a doctor, later said that the alleged lack of robust data on natural immunity seemed to be correctable. “Why have we not done the research?” he asked.

“I’m told you have patient-identifiable data,” which would allow the agency to examine the issue, he added.

Fauci said that natural immunity and vaccination lead to memory B cell and T cell responses.

“One of the goals over the next several months, which are currently being done by our grantees, is to determine the clinical correlation between the development and maturation of B cell and T cell responses and clinical effect. We’re looking at that both post-vaccination, post-boost, and in individuals who have been infected,” he said. “Hopefully we’ll get more definitive information over the next several months.”