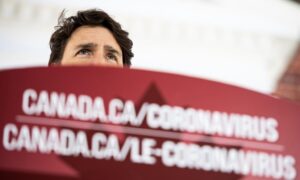 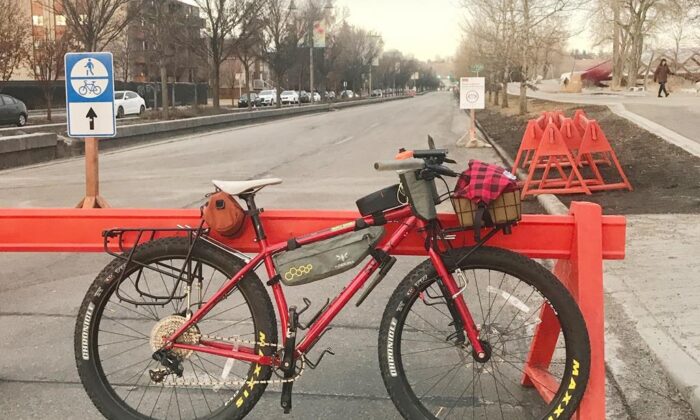 A sign showing a road that's been turned into a pedestrian and bike path is shown in Calgary in this recent handout photo. Fans of a decision by Calgary officials to block off some traffic lanes to give pedestrians and cyclists extra room for social distancing hope others cities will step up and do the same. (The Canadian Press/HO - Greg Glatz)
Canada

CALGARY—Fans of a decision by Calgary officials to block off some traffic lanes to give pedestrians and cyclists extra room for social distancing hope others cities will follow suit.

Starting Saturday along certain Calgary sidewalks and pathways with larger volumes of pedestrian traffic, crews have placed pylons and other barricades onto a lane of adjacent roadway for people to step onto so they can safely maintain a two-metre separation from others.

“We’re not encouraging people to go and hang around these places, but what we have done is closed a couple of lanes, again in high-pedestrian-centric locations, just to allow people to have more space between them if they are walking,” explained Sean Somers with the city’s transportation department.

Officials insist that people stay home as much as possible during the COVID-19 outbreak, and say those who must go out should stay two metres away from others.

But many walkways aren’t wide enough to enable people to easily maintain that distance.

Vehicle use appears to be down in Calgary since many people are now working from home, Somers said, so there isn’t as much traffic on the roads.

“Last week I was going in to the emergency operations centre and it took me 15 minutes. I would say normally it’s double that to get there from my house,” Somers said, noting that the idea is being treated a pilot project and will be evaluated to see how well it works.

Greg Glatz, a commuter cyclist in Calgary, said he thinks the newly created bike and pedestrian lanes are fantastic. Even during a late evening ride on Saturday he noticed people on bikes and on foot using one that’s downtown on Memorial Drive near the Bow River.

But he said there was another path during his ride, along Crescent Road, that he said could have used one, where a large number of pedestrians were enjoying the sunset.

“There were eight people walking across the path side-by-side, and someone asked them to make some space, and they did a fake sneeze,” Glatz said. “I would love to see it done up there.”

Kimberley Nelson, who represents Alberta on the Velo Canada Bikes board, said she and other cycling advocates began suggesting the idea of closing some traffic lanes a week ago. Since Calgary announced late last week that it would do it, she said councillors in some other Canadian cities are also advocating for it on social media.

Nelson noted many doctors in Calgary cycle to work.

“Being able to ensure they’re able to do so in a safe manner is really important right now,” Nelson said.