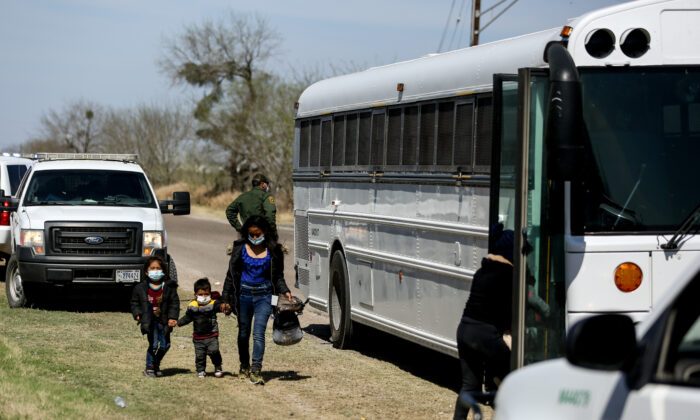 The recent surge of illegal immigrants and unaccompanied minors attempting to cross the U.S.–Mexico border can be directly attributed to the immigration policies enacted by President Joe Biden, according to experts and the administration’s own officials.

Biden, who pledged on the campaign trail to reverse his predecessor’s immigration policies, refuses to describe the historically high numbers of illegal immigrants entering the country as a “crisis,” something that journalists have increasingly been pressing his administration on.

But some are starting to question what lies beneath the surface of what’s going on.

“I think the real question is, why are they doing this?” James Carafano, vice president of the Heritage Foundation’s Kathryn and Shelby Cullom Davis Institute, told The Epoch Times. “And you could argue it’s actually a deliberate policy that they’re actually seeking to attract illegal aliens into the United States.”

There are three data points that together help paint this picture, according to Carafano. First, it’s the policies that are clearly attracting an unprecedented number of illegal immigrants, such as the shutdown of the border wall, reinstating the “catch and release” policy, and the restriction of ICE agents’ ability to do their jobs, among other reversals of President Donald Trump’s border policies. Then there’s the H.R. 1 election bill, which includes a provision that noncitizen residents on a path to citizenship can vote in U.S. elections. And finally, there’s an amnesty bill that places most illegal immigrants in the country on a path to citizenship.

Placing these factors together makes it “very, very difficult to not argue they’re just literally trying to import millions of new voters they hope will vote Democrat forever,” he said.

“The additional resources that the Biden administration is sending to the border are not to secure the border—it’s to help move people into the United States faster.”

White House press secretary Jen Psaki recently appeared to confirm that. At a March 11 briefing, Psaki responded to a reporter pressing her on the administration’s refusal to call the border surge a crisis. The reporter noted there are thousands of unaccompanied minors in Border Patrol custody.

“We want to expedite the timeline between when kids cross the border and when they are getting to sponsor homes,” Psaki said. “So our focus here is on getting to the root of the issues and taking actions, and we don’t feel the need to play games with what it’s called.”

In early March, it appeared that illegal immigrants were photographed donning T-shirts in support of Biden at the San Ysidro crossing port in Tijuana, Mexico. One of them held up a poster that read, “Biden, please let us in!” according to FOX10Phoenix.

Roberta Jacobson, the Biden administration’s southwestern border coordinator, told reporters during a White House briefing that it acknowledged its new immigration policies may be driving the migrant surge at the southern border.

“Surges tend to respond to hope, and there was a significant hope for a more humane policy after four years of pent-up demand,” she told reporters.

Border Patrol apprehended 100,441 illegal border-crossers along the southern border in February, according to Customs and Border Protection (CBP). At the same time, another 26,000 people evaded capture, according to Jaeson Jones, a former Texas Department of Public Safety captain who received the provisional CBP data from internal sources, which were reviewed by The Epoch Times.

“We are on pace to encounter more individuals on the southwest border than we have in the last 20 years,” Department of Homeland Security Secretary Alejandra Mayorkas stated on March 16.

Carafano said the Biden administration sees it not as a crisis, but an opportunity. “When they say there’s a challenge on the border, from their perspective, they see the challenge is that they don’t have the resources to move people, illegal aliens, into the country fast enough,” he said.

“I think they’re absolutely trying to not be clear with the American people about what their plan is.”

In a March 12 op-ed penned by Carafano and former Acting Secretary of Homeland Security Chad Wolf, the pair argue that Biden’s policy changes “clearly signaled that Team Biden is not serious about border security or enforcing present immigration laws.”

“It is hard to believe that the administration did not foresee that their actions would spark a run to the border,” the two wrote. “Perhaps, the surprise has been how fast and how voluminous it has been.”

Jeh Johnson, Homeland Security secretary during the Obama administration, said the country was “truly in a crisis” when referring to the border during a 2019 interview. Johnson said that when daily apprehensions surge over 1,000 people, it “overwhelms the system.”

Border authorities are currently encountering 4,000 to 5,000 people daily, an unnamed Department of Homeland Security (DHS) official told CNN on March 9, noting that just over 500 of them are unaccompanied children.

Under Biden’s immigration agenda, construction of the US-Mexico border wall was shut down and ICE agents are now limited by narrower guidelines. The DHS is also suspending deportations of illegal aliens for 100 days with the exception of those who have “either engaged in or are suspected of terrorism or espionage.”

And as of Jan. 21, DHS no longer enrolls asylum seekers newly arriving on the southern border in a Trump program known as the Migrant Protection Protocols (MPP). Biden in January had promised on day one of a Biden presidency to “eliminate President Trump’s decision to limit asylum and end” the program that ensures asylum seekers remain in Mexico while waiting for their claims to be adjudicated.

Carafano also criticized comments by the press secretary and other Biden officials who argue they are reversing immigration policies to make them more humane.

“Well look, you’re incentivizing illegal immigration, which by definition is inhumane,” he told The Epoch Times. “First of all, it massively puts illegal immigrants at risk. It’s incredibly dangerous to come to the United States illegally across the border.”

“There’s not just the exploitation by the cartels, but the murder, robbery, and all other kinds of things,” he added. “And then you’re intentionally encouraging policies that break up families, and they have reports of parents literally throwing their kids across the border. So this is not making the world more humane. This is essentially creating a massive civil and human rights crisis.”

The higher concentration of illegal immigrants along the border has encouraged gangs to recruit some as drug mules, and kidnap others for money, said Cesar Peniche, the attorney general of Chihuahua, the state that shares the longest stretch of border with the United States.

Both Mexican and U.S. policy should be more clear-cut so as not to spur illegal immigration, he told Reuters.