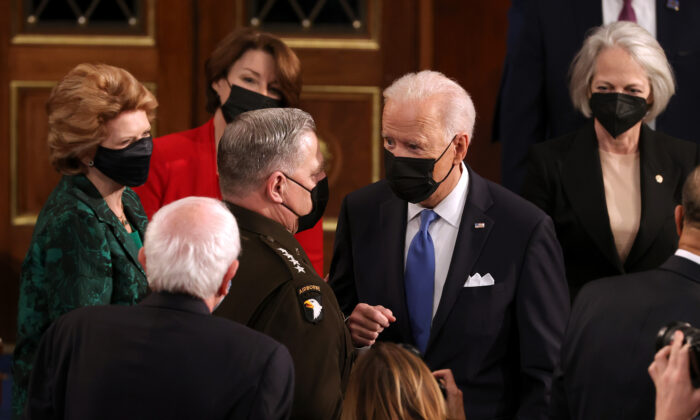 President Joe Biden speaks with Chairman of the Joint Chiefs of Staff Mark A. Milley (L) after addressing a joint session of Congress at the U.S. Capitol in Washington on April 28, 2021. (Chip Somodevilla/Getty Images)
Executive Branch

President Joe Biden is standing by Gen. Mark Milley, the top military officer in the United States, following reports that Milley secretly called a Chinese general during former President Donald Trump’s administration and promised to tip off the communist country regarding any potential U.S. attack.

Several anonymously sourced reports alleged Milley called Gen. Li Zuocheng of the People’s Liberation Army once in 2020 and another time in January to assure him that the United States wouldn’t attack the Chinese Communist Party and if they were poised to attack, he would alert his counterpart.

While Republicans described the actions of Milley as treasonous if they indeed took place, Biden is backing the Trump appointee.

“I have great confidence in General Milley,” Biden told reporters in Washington on Sept. 15.

His brief comment, which didn’t touch on the veracity of the allegations, came after White House press secretary Jen Psaki told reporters separately that the president was standing by the general even if the calls did happen.

Psaki said Biden believes Milley “is patriotic” and that “his fidelity to our Constitution is unquestionable.” She claimed the context of when the calls allegedly took place was important, accusing Trump of “fomenting an insurrection,” referring to Jan. 6, and that “there was broad concern about many members of his national security team” in the wake of the U.S. Capitol breach.

“It’s the obligation of every chairman of the joint chiefs to follow constitutional order to prevent unlawful military action,” she also said.

“He has full trust and confidence in Chairman Milley and the job he’s doing,” he told reporters at the Pentagon.

The Joint Chiefs of Staff (JCOS), which Milley chairs, said in a statement that Milley regularly talks with counterparts around the world, including counterparts in China and Russia.

“His calls with the Chinese and others in October and January were in keeping with these duties and responsibilities conveying reassurance in order to maintain strategic stability. All calls from the Chairman to his counterparts, including those reported, are staffed, coordinated and communicated with the Department of Defense and the interagency,” a spokesman for the group said.

“General Milley continues to act and advise within his authority in the lawful tradition of civilian control of the military and his oath to the Constitution,” the spokesman added.

But top Republicans assert that what Milley did constituted treason and that he should be ousted and possibly face charges.

“If it is actually true, which is hard to believe, that he would have called China and done these things and was willing to advise them of an attack or in advance of an attack, that’s treason,” Trump said in a phone call with Newsmax.

The former president in a written statement said the reporting was inaccurate and that he never thought of attacking China.

Sen. Marco Rubio (R-Fla.) on Fox News said Milley, if he made the calls, was “basically ignoring the Constitution, deciding he’s going to call a potential adversary and an enemy of the United States, and collude with them and tell them that ‘if I’m ever ordered to do something, I’m going to tell you about it first.'”

“I don’t care what you think of President Trump, the Chairman of the JCOS working to subvert the military chain of command and collude with China is exactly what we do not accept from military leaders in our country. He should be court-martialed if true,” Sen. Rand Paul (R-Ky.) added in a statement.

Sens. Roger Marshall (R-Kan.) and Cynthia Lummis (R-Wyo.), and Reps. Warren Davidson (R-Ohio), Jody Hice (R-Ga.), and Guy Reschenthaler (R-Pa.) were among the other Republicans calling for Milley, who is slated to testify to Congress later this month, to resign or be fired if the allegations are true.

“It’s plain and simple: If Milley’s alleged traitorous behavior is true, he must resign or be fired immediately,” Reschenthaler wrote on Twitter.