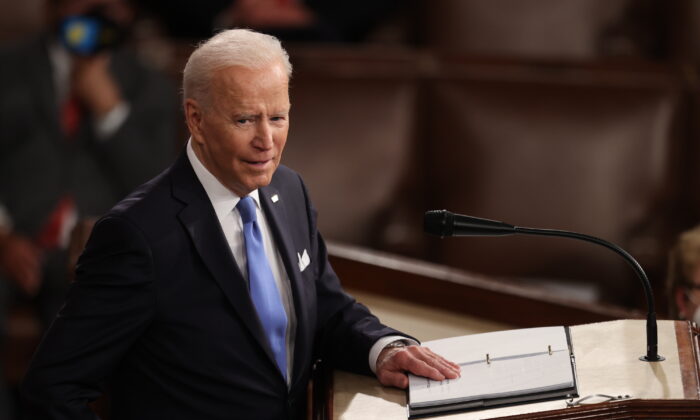 President Joe Biden addresses a joint session of Congress in the House chamber of the U.S. Capitol in Washington, on April 28, 2021. (Jonathan Ernst-Pool/Getty Images)
Thinking About China

“We’re in a competition with China and other countries to win the 21st century,” President Biden told a joint session of Congress on April 28. The speech was panned by a jaundiced writer in the New York Times as oversimplified. But he got that wrong. Democracy is in an existential competition, if not conflict, with China. And Biden knows it.

“Secretary Blinken can tell you, I spent a lot of time with President Xi—traveled over 17,000 miles with him, spent over 24 hours in private discussions with him. When he called [to] congratulate, we had a two-hour discussion,” said Biden. “He’s deadly earnest on becoming the most significant, consequential nation in the world.” Biden makes a Freudian slip here, implying that Xi thinks of himself as a future hegemonic Chinese nation.

“[President Xi] and others, autocrats, think that democracy can’t compete in the 21st century with autocracies, because it takes too long to get consensus,” Biden said. Biden got this impression of Xi from the horse’s mouth. One can’t be an American, hear these words from China’s leader, and not be alarmed into action. Too bad Biden didn’t convince Obama to take a tougher stand, years ago.

Refreshingly, however, the president focused some of his speech on reviving America’s industrial strength. “There is simply no reason why the blades for wind turbines can’t be built in Pittsburgh instead of Beijing,” he said, adding, “there’s no reason why Americans—American workers can’t lead the world in the production of electric vehicles and batteries.”

Here Biden could be taking a shot at Elon Musk, the billionaire CEO of Tesla Motors who recently ramped up production of electric cars in Shanghai instead of Detroit. Or, he could be offering Musk support. Tesla is an American company that is likely caving to China’s demand for technology transfers, jobs, and nothing less than abject public submission in Maoist style, to gain market access. In the last two weeks, the Chinese Communist Party (CCP) pressured Tesla so publicly about a woman’s disputed brake failure that the company said it will engage in “self-examination” and “self-correction” in order to “rectify” its customer service problems. There’s nothing an American corporation won’t do for money.

Biden is rightly borrowing from the Trump administration’s focus on rebuilding American industry, which is an absolute requirement if the United States is not to fall behind China economically and militarily. America, not China, must lead American industry.

Note that Biden has not yet removed Trump’s tariffs on China. Trump broke the mold with tariffs, against most of the economists’ advice (almost all of them other than Peter Navarro), and Biden is following along in his wake. Those economists will now have to rethink their free trade models, and include more national security variables in them rather than just consumer prices. Biden is doing the right thing to leave the Trump tariffs in place, but he will soon have to lead against China, not just coast along on Republican innovations. If he can’t lead, we’ll need another Republican president to do so, starting in 2024.

In yesterday’s speech, Biden lamented America’s failure to invest at least 2 percent of GDP in research and development. He said we maintained 2 percent decades ago, claiming that today, that number is down to less than 1 percent. “China and other countries are closing in fast,” he said. “We have to develop and dominate the products and technologies of the future. Advanced batteries, biotechnology, computer chips, clean energy.” He got this right.

Biden mentioned the U.S. Defense Advanced Research Projects Agency (DARPA), which invented the internet and GPS. But unfortunately, he didn’t actually call for more defense funding into pure research. Instead, he called for a new health-focused agency (HARPA?) to be run by the National Institutes of Health (NIH). Sure we need HARPA, but we need more funding for DARPA as well. America must maintain its technological edge, especially its military edge, over our only real global competitor: China.

At points in the speech, Biden said the words he wanted Xi Jinping to hear. “In my discussions with President Xi, I told him we welcome the competition. We’re not looking for conflict.”

This and Biden’s offer to cooperate on climate change will assuage an American public that is getting increasingly jittery about the possibility of a new Cold War, with all the risk that entails in the nuclear era. But Biden must know by now that while we are not looking for conflict (President Obama proved that beyond a doubt), Xi Jinping is. He is territorially expansionist, and genocidal against his own population. Contemporary China has a system of apartheid in which some minorities have no freedom of movement, and the Han “race” has virtually all the power. The American people need to know, from the bully pulpit of the presidency and in a more declarative style, that Beijing is out to get us.

Biden did say that he will “defend America’s interests across the board,” including against unfair trade practices, and theft of technology and intellectual property. He promised to “maintain a strong relationship in the Indo-Pacific, just as we do for NATO and Europe. Not to start a conflict, but to prevent one.” He promised to stay committed to human rights, freedom, and our alliances. “An American president has to represent the essence of what our country stands for,” he said. “America is an idea, the most unique idea in history. We are created, all of us equal. It is who we are. And we cannot walk away from that principle and in fact say we are dealing with the American idea.”

Defending this American idea of equality, as well as that of freedom, will require sacrifice. More sacrifice than Biden admitted in his speech. Defending freedom has always required sacrifice. Getting the American people ready for the sacrifice needed to defeat the Chinese Communist Party will eventually require not only tougher words from our president, but much tougher actions.