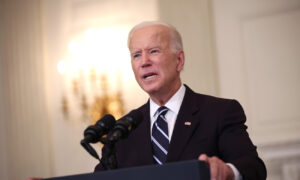 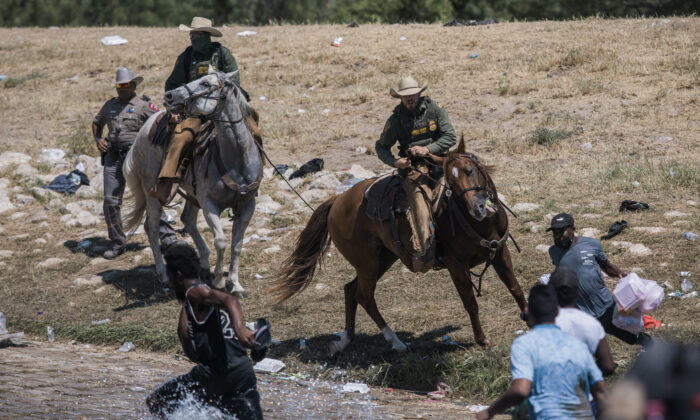 Biden Condemns Images of Border Patrol Agents on Horseback: ‘Those People Will Pay’

President Joe Biden says he takes full responsibility for the chaos at the U.S. southern border and vows the border patrol officers photographed dispersing illegal immigrants while on horseback “will pay” in his first public address of the situation Friday.

The Biden administration announced the suspension of horse patrols in Del Rio Thursday amid an ongoing investigation into the photographs and video that surfaced earlier in the week showing border patrol officers riding close to and grabbing at the illegals while on horseback. The agents in the photos have been placed on leave while the case is under review.

“Of course, I take responsibility, I’m president,” said Biden while taking questions from reporters Friday. “It was horrible what you saw, to see people treated like they did, horses nearly running them over, people being strapped. It’s outrageous. I promise you those people will pay. They will be—an investigation underway now and there will be consequences.”

Biden went on to call the images “beyond an embarrassment,” “dangerous,” and “wrong.”

The incident occurred as illegal immigrants, primarily from Haiti, have flooded to the U.S. southern border, many camping out under an international bridge near the border at Del Rio. Estimates of the size of the camp have been as high as 15,000 as recently as this past weekend.

White House press secretary Jen Psaki told reporters Thursday repatriation flights back to Haiti have ramped up in recent days. She said 12 flights have returned 1,401 Haitians to their country of origin since Sunday, Sept. 19. She said 3,206 migrants have been removed from the Del Rio camp in U.S. Customs and Border Protection (CBP) custody or to other sectors of the U.S. border to either be expelled under Title 42 or be placed into removal proceedings.

Psaki said less than 5,000 Haitians remain at camps in the Del Rio sector. She did not say how many have been released into the United States, and the Department of Homeland Security (DHS) has not provided that information. DHS Secretary Alejandro Mayorkas is scheduled to take questions from reporters Friday afternoon.

A top Border Patrol union official, Brandon Judd, told The Epoch Times this week that agents were not whipping their reins at the illegal aliens.

The border situation has also led to the resignation of the U.S. Special Envoy for Haiti Ambassador Daniel Foote, who in a letter to Secretary of State Antony Blinken said he “will not be associated with the United States inhumane, counterproductive decision to deport thousands of Haitian refugees and illegal immigrants to Haiti, a country where American officials are confined to secure compounds because of the danger posed by armed gangs in control of daily life.”

Psaki has repeatedly told reporters that migrants from all countries are currently not being allowed access into the United States under Title 42 with other options for asylum being offered on a “case by case basis.” There have also been several reports that some of the migrants are being released into the U.S. interior.

Katabella Roberts and Charlotte Cuthbertson contributed to this report.