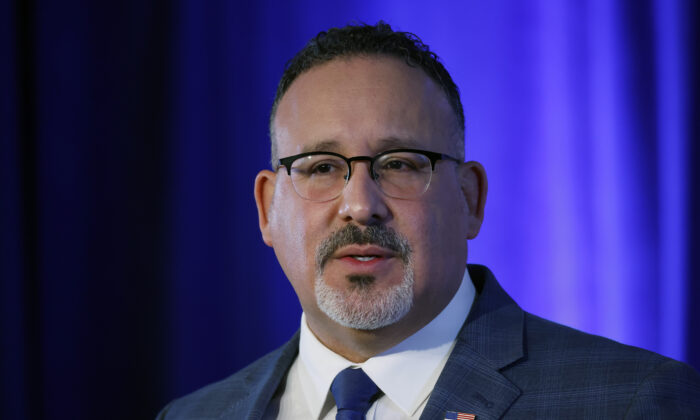 The U.S. Department of Education has proposed an overhaul of anti-sex-discrimination rules, reinterpreting the term “sex” as something that doesn’t have to have a biological basis.

The proposal is announced on the 50th anniversary of Title IX, the federal law that prohibits “sex-based discrimination” in federally funded educational settings. It broadens the definition of “sex” so that Title IX protections would cover sexual orientation and gender identity.

“The Department does not construe the term ‘sex’ to necessarily be limited to a single component of an individual’s anatomy or physiology.”

The proposal also seeks to establish that refusing to accommodate a preferred gender identity in school activities is substantially harmful enough to constitute a Title IX violation.

According to the new regulation, “adopting a policy or engaging in a practice that prevents a person from participating in an education program or activity consistent with the person’s gender identity subjects a person to more than de minimis harm on the basis of sex,” and is therefore punishable under Title IX.

Effectively, this could mean that schools and colleges would be stripped of federal funding if they maintain the segregation of sports and spaces such as restrooms and locker rooms based on biological sex.

Education Secretary Miguel Cardona said the changes are in accordance with President Joe Biden’s March 2021 executive order, which vowed to guarantee an educational environment “free from discrimination based on sex, including sexual orientation or gender identity.”

When it comes to how schools should handle sexual misconduct allegations, Cardona took the opposite approach to his predecessor, Betsy DeVos, who narrowed the scope of complaints that schools have to investigate and potentially punish.

Cardona seeks to widen schools’ responsibilities in addressing sexual misconduct. Under the new rules, schools must respond to complaints of “a hostile environment based on sex,” including those that occur outside their campuses, such as a school trip to another country.

Some due process protections introduced during the DeVos era have also been removed from the new rules. For example, the alleged perpetrators and victims of sexual harassment would no longer have the equal right to submit, cross-examine, and challenge evidence at a live hearing.

The proposal will enter a 60-day public comment period once it is published in the Federal Register.

A Fight Over Definition

The proposed regulation marks the latest move in a decade-long argument over what exactly “sex” means in Title IX. The Obama administration first tried to expand the definition, writing in an April 2011 “Dear Colleague” letter that Title IX protection “extends to claims of discrimination based on gender identity or failure to conform to stereotypical notions of masculinity or femininity.” The Trump administration tossed that guidance, saying that only Congress or the Supreme Court has the authority to redefine that term.

In January 2021, the Education Department issued a memorandum stating that the term “sex” in Title IX unequivocally means “biological sex, male or female.” The memo (pdf), issued the day after DeVos resigned as education secretary and just days before Biden entered the White House, says that schools don’t violate the law when they ban transgender students from using restrooms matching their claimed gender identities.

Reed Rubinstein, then-principal deputy general counsel for the department, argued that the term “sex” must be interpreted based on what it meant when Title IX became law.

“Based on controlling authorities, we must give effect to the ordinary public meaning at the time of enactment and construe the term ‘sex’ in Title IX to mean biological sex, male or female,” Rubinstein wrote in the memo. “Congress has the authority to rewrite Title IX and redefine its terms at any time. To date, however, Congress has chosen not to do so.”

The Rubinstein memo is written as a discussion of whether the enforcement of Title IX was affected by the U.S. Supreme Court’s June 2020 decision in Bostock v. Clayton County. In that case, a 6–3 majority ruled that employment discrimination based on one’s sexual orientation is a violation of Title VII, the federal law prohibiting discrimination in the workplace on the basis of sex.

“The court decided the case narrowly, specifically refusing to extend its holding to Title IX and other differently drafted statutes,” Rubinstein noted.

While the Biden administration promises that proposed changes will “continue that progress” in protecting girls’ and women’s equal access to opportunities in schools, many argue that this is actually a setback for what Title IX has accomplished.

“On this 50th anniversary of Title IX, when we are proud to celebrate the accomplishment of millions of women across the country, the Biden Administration outrageously offers new regulations that would redefine sex, equating gender identity with biological reality,” said Penny Nance, CEO and president of Concerned Women for America.

“What a slap in the face to women who have achieved so much,” she said. “Biden has just erased you.”